Background: Abandoned mines and mine tailings from metal ore mining generate large quantities of acidic rock drainage (ARD). ARD is formed by the accelerated weathering of metal-sulfide-rich rocks that are exposed to oxygen by mining activities. The resulting plumes are not only highly acidic (due to sulfuric acid formed from sulfide mineral oxidation), but also contain high concentrations of heavy metals (e.g., Cu, Zn, Pb). ARD lowers the pH of water to levels toxic to aquatic flora and fauna, disrupting the ecosystem at all levels.

Because ARD is typically generated at remote sites where the parties responsible for the contamination are difficult to pinpoint, viable solutions for the treatment of ARD must be low-cost and low-maintenance. Often, passive treatment systems such as constructed wetlands and permeable reactive barriers (PRB) are used. Many passive treatment strategies rely on the activity of sulfate-reducing bacteria (SRB), which utilize sulfate as a terminal electron acceptor in the absence of oxygen. PRBs for treatment of ARD generally use organic substrates as electron donors.

Dr. Jim Field, University of Arizona SBRP, is evaluating zero valent iron (ZVI) as an inexpensive electron donating media in PRBs used for the treatment of ARD. He believes that including ZVI in a PRB could: 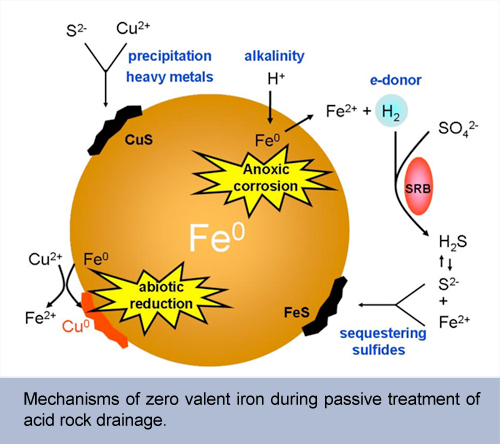 Advances: Dr. Field's group built packed bed columns that contained varying ratiosof sand, compost, crushed limestone, and ZVI. They packed the control column with a mixture of compost and sand; while the treatment column was packed with a mixture of ZVI, compost, and sand. The researchers fed synthetic ARD through the columns, and found that:

2. The control column sustained sulfate-reducing activity for only 250 days when the biodegradable substrate in the compost was exhausted. This left the sulfate-reducing bacteria with no source of electrons to fuel metabolic processes.

The researchers also measured outflow of sulfides from each column. In the control column, sulfate was converted to sulfide and discharged; the treatment column (containing ZVI) reduced approximately twice as much sulfate than the control, but discharged approximately one fourth of the sulfide indicating that excess sulfides were being sequestered.

To examine the impact of ZVI on removal of metals, the researchers added copper to the 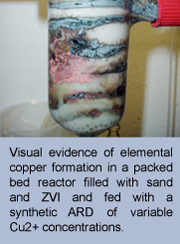 Dr. Field also studied the pH of column effluents. From Day 0-200, the synthetic ARD was introduced into the columns at pH 7.3; after Day 200, ARD pH was reduced to 3. Following this change, the pH of control effluent decreased from 7.3 to 6.3, and the pH of the treatment column effluent remained semi-alkaline (pH 9.5), due to the extra alkalinity production by ZVI corrosion.

Significance: Dr. Field's research demonstrates that ZVI is readily utilized as an electron source by sulfate reducing bacteria. The lab's work demonstrates that the inclusion of ZVI in passive sulfate-reducing systems for ARD treatment may improve their performance. In addition to an increased electron supply, ZVI lowers sulfide discharge, improves the removal of Cu over long-term operation, and results in a greater production of alkalinity.