Background: Sediments are the recipients of most organic and inorganic contaminants released into the environment. They are often contaminated with mixtures of polycyclic aromatic hydrocarbons (PAHs), as well as polychlorinated biphenyls (PCBs), pesticides, heavy metals, and other compounds. While there are extensive data to confirm that PAHs and other sediment contaminants are toxic to aquatic receptors, information about the bioavailability and genotoxicity of complex mixtures to aquatic organisms is limited.

The results of chemical analysis generally do not predict toxicity in a biological system, particularly for complex pollutant mixtures such as PAHs or PCBs. Dr. K.C. Donnelly, Texas A&M University SBRP, believes that a battery of biomarkers provides a valuable tool that can adequately characterize subtle, sublethal, or genotoxic effects of chemical mixtures. Much like different instruments or detectors can be used to detect different classes of chemicals, a battery of biological tests can be used to detect a range of toxic or genotoxic effects. A collaboration between six university-based programs (Baylor, Duke, Michigan State, UC-Davis, UC-San Diego and Texas A&M) resulted in the formation of a National Bioassay Network to develop a protocol for analysis of sediments. The goal of the National Bioassay Network is to design an integrated biomonitoring approach using chemical analyses and a suite of biomarkers to characterize the bioavailability and genotoxicity of complex chemical mixtures in sediments. In collaboration with Dr. Bruce Duncan (USEPA Region 10), the Bioassay Network conducted a monitoring study using caged Coho Salmon in a freshwater lake near a PAH-contaminated site in Region 10.

Advances: Four approaches have been used separately to assess exposure and genotoxicity of chemical mixtures in aquatic organisms: 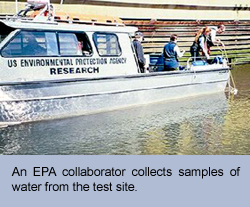 Dr. Donnelly's group used all four measures, along with chemical analyses, in a field study designed to mimic the exposure scenario experienced by migratory juvenile Coho Salmon. Caged salmon were suspended in the water column at sampling stations in a freshwater lake contaminated by a former manufactured gas plant (MGP), or in a reference (control) lake. USEPA SCUBA divers collected sediment samples at each station the day before placement of salmon cages. They also collected lake water samples at each sediment station at the beginning and end of the one week long fish exposure study.

Briefly, they found that:

This exposure scenario study demonstrated that PAHs in sediments and lake water are bioavailable and can have a genotoxic impact on migratory juvenile Coho Salmon.

Significance: When incorporated into a well-designed in situ biomonitoring plan, the biomarkers used in this research appear to provide sensitive measurements of the bioavailability and genotoxicity of PAH-contaminated sediments to aquatic species. Such biomarkers of exposure and effect can be used to establish quantitative correlations of the cause and effect relationship of a toxicant at any level of biological organization, from an individual organism up to a population or ecosystem. In situ biomonitoring has a great potential for linking biomarker data with community and ecosystem level responses.

Biomarkers respond to toxicant exposures in a time-dependent manner and have varying levels of longevity and stability. Thus, using multiple biomarkers of exposure and effect should improve the quality of the risk assessment. It may be useful to combine the measurements of genotoxicity (e.g., DNA adduct formation), as a molecular dosimeter, with an analysis of carcinogen metabolism, exposure dose, and the determination of tumor formation in order to provide insight into the dose-response relationship and the mechanisms involved in chemical carcinogenesis.