New Understandings of Benzene Metabolism and Implications for Risk Assessments

Background: Benzene is carcinogenic, but must be metabolized to exert its toxicity. Although benzene is the simplest aromatic compound, its metabolism is surprisingly complex. 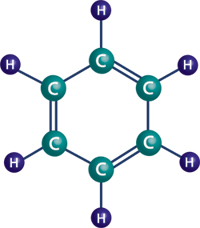 With funding in part from the Superfund Basic Research Program, Drs. Stephen Rappaport (University of North Carolina, Chapel Hill SBRP) and Martyn Smith (University of California, Berkeley SBRP) have worked together on investigations of various aspects of human metabolism of benzene. They have developed and applied biomarkers of exposure, namely, benzene in breath and urine, benzene metabolites in urine, and protein adducts of benzene metabolites in blood; and investigated biomarkers of effect, in the form of changes to gene expression and DNA. They measured many of these biomarkers in over 1000 benzene-exposed workers and controls in numerous studies, as part of collaborations with Drs. Lan and Rothman at the National Cancer Institute (NCI) and Dr. Qu at New York University. Among their many findings, these collaborators have shown that:

The collaboration continues, and the research groups led by Drs. Rappaport and Smith recently published findings of two studies designed to investigate dose-related metabolism and interindividual variations in humans exposed to benzene.

Advances: In earlier work, the researchers documented unexpected patterns in benzene metabolite levels over a wide range of exposures to benzene, particularly at air concentrations below 1 ppm. These findings led them to hypothesize that an unidentified metabolic pathway was mainly responsible for benzene metabolism at ambient levels. If this hypothesis is correct, then persons exposed to air concentrations below 1 ppm efficiently metabolize benzene and receive greater doses of toxic metabolites per ppm of exposure than persons exposed above 1 ppm. To test this hypothesis, the researchers considered two models of benzene metabolism, namely, (1) incorporating a single enzyme; and (2) involving two enzymes, one of which was primarily active at low air concentrations and the other primarily active at high air concentrations. After combining exposure and urinary metabolite data from two earlier studies of nonsmoking women, they statistically tested whether the data were better fit by the one-enzyme model or the two-enzyme model. They found substantial statistical evidence favoring the model with two metabolic enzymes. Because concentrations of benzene in ambient air tend to be less than 0.01 ppm, these results suggest that the previously unrecognized enzyme active at low concentrations is responsible for most metabolism of this airborne carcinogen in the general population. Applying the two-enzyme model, it is reasonable to conclude that current risk assessments would likely underestimate leukemia risks at ambient air concentrations of benzene by a factor of about three for nonsmoking women.

In a separate study, the researchers searched for genetic variations that might be related to differences in human susceptibility to benzene exposure. They examined 411 genes,

looking for associations between DNA sequence changes (single-nucleotide polymorphisms, or SNPs) and white blood cell counts in 250 exposed and 140 control individuals. Their analysis of nearly 1400 SNPs identified significant associations with five genes that are related to DNA repair and genomic maintenance. In vitro functional studies provided evidence that these genes, or related gene products, are key components of susceptibility to benzene-induced hematotoxicity in humans.

Significance: Benzene is a truly ubiquitous environmental contaminant. It is found at over half of the EPA's National Priorities List sites, and we are routinely exposed to benzene via second-hand cigarette smoke, automobile emissions, and gasoline vapors.

Taken together, the results of research led by Drs. Rappaport and Smith suggest that the leukemia risk associated with exposures to environmentally relevant levels of benzene could be substantially greater than currently assumed for the general population, and even higher for subgroups with specific genetic susceptibilities. These findings introduce new complexities into the already significant challenges faced by environmental and public health practitioners charged with making decisions regarding regulatory actions and potential cleanup costs, estimated in the billions of dollars.