Background: Epidemiologic studies have linked prenatal exposure to polychlorinated biphenyls (PCBs) with adverse neurobehavioral, immunologic, and reproductive effects. While there is substantial evidence that PCBs can interfere with both aryl hydrocarbon receptor and estrogen receptor signaling pathways, our understanding of the molecular mechanisms underlying the effects of prenatal PCB exposures is limited.

As part of the SRP at Brown University, Dr. Surendra Sharma leads a research team working to identify pathways and targets related to adverse effects on pregnancy following maternal PCB exposure. The group is studying the effects of PCB exposures on the immune and hormonal responses during pregnancy that control the anti-inflammatory intrauterine environment, which is crucial to fetal development and pregnancy success.

Advances: The Sharma group developed an experimental system to evaluate in utero gene-environment effects of PCB exposures. They compared pregnancy outcomes of wild type mice to those in a mouse knockout (KO) strain lacking interleukin-10 (IL-10), an anti-inflammatory cytokine involved in regulation of inflammation, immunity, and development of blood cells. 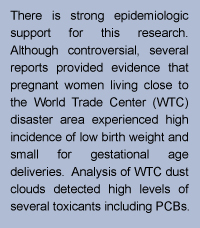 IL-10 has been shown to be produced at the maternal-fetal interface in both humans and mice. They learned that low dose exposures to inflammatory triggers, such as lipopolysaccharide, resulted in higher rates of preterm births in IL-10 KO mice than wild type mice. This effect was reversed by treatment of the KO mice with IL-10. These findings suggest that inflammatory responses, coupled with genetic stress (IL-10 deficiency), may lead to adverse pregnancy outcomes.

The researchers then conducted a complex series of experiments designed to quantify the effects of PCB exposure and investigate the effects at the organ, tissue, and molecular levels. They exposed pregnant wild type and IL-10 KO mice to Aroclor 1254, a mixture of more than 100 structurally distinct PCBs. In the treated IL-10 KO mice, multiple adverse effects were observed:

The treated IL-10 KO mice also had a 2-fold increase in amniotic fluid. The Sharma group believed that this combination of effects pointed to mechanisms related to angiogenesis (growth of blood vessels). This led them to investigate aquaporins (proteins that allow the passage of water across cell membranes), specifically AQ-1, as targets of Aroclor 1254. They conducted in vivo studies in mice and in vitro studies with human cell lines to verify that Aroclor 1254 exposure suppresses AQ-1 expression, disrupting angiogenic processes at the maternal-fetal interface.

The researchers also found that administering IL-10 to the KO mice prevented not only the adverse effects on pregnancy outcomes, but also prevented neuromotor defects in offspring. A US patent application has been filed on the "Use of Interleukin-10 (IL-10) as an Anti-toxicant Cytokine".

Significance: Dr. Sharma's research team found that AQ-1 is a novel in utero target of PCBs. This work provides the first evidence for a complex interaction between genetic stress, PCB exposure, Aquaporin 1 expression, and angiogenesis, and its importance at the maternal-fetal interface. Dr. Sharma believes that this finding is important in consideration of the fact that the environmental levels of PCBs have not declined and these toxicants remain serious health risks, particularly in genetically stressed individuals.

Biomarkers respond to toxicant exposures in a time-dependent manner and have varying levels of longevity and stability. Thus, using multiple biomarkers of exposure and effect should improve the quality of the risk assessment. It may be useful to combine the measurements of genotoxicity (e.g., DNA adduct formation), as a molecular dosimeter, with an analysis of carcinogen metabolism, exposure dose, and the determination of tumor formation in order to provide insight into the dose-response relationship and the mechanisms involved in chemical carcinogenesis.