Can Phytoremediation Work for PCBs?

Background: Phytoremediation – using plants and associated bacteria for the treatment of polluted soil and groundwater – is widely accepted as a viable technology for the remediation of soil and groundwater contaminated with metals and organic compounds such as pesticides and chlorinated solvents. There have been limited efforts to investigate the potential for phytoremediation of sites contaminated with polychlorinated biphenyls (PCBs) as it was believed that PCBs are too hydrophobic to be taken up by plants and/or transported to plant tissues to be metabolized.

Using in vitro studies with cell and tissue cultures, researchers have demonstrated that several plant species (e.g., tobacco, nightshades, horseradish, and alfalfa) can metabolize PCBs, though the extent of metabolism varies with the plant species and number and position of the chlorine substitutions of the PCB congeners. Although cell and tissue cultures serve as rapid screening tools, in vivo studies with whole plants are needed. Dr. Jerald Schnoor at the University of Iowa SRP is conducting research to evaluate the ability of plants to take up and degrade lower-chlorinated PCB congeners to less toxic residuals. 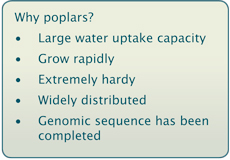 Advances: To begin, Dr. Schnoor's research group hydroponically exposed whole hybrid poplars (Populus deltoides × nigra) to mixtures of mono-, di-, tri, and tetra-chlorinated PCBs to quantify uptake. They found that each of the PCBs was taken up by the poplar root systems, but the levels of sorption, uptake, and translocation were related to the hydrophobicity of the congeners. Mono- and di-chlorinated PCBs were translocated from the roots to the secondary stem. The tri-chlorinated PCB was translocated to the main stem but not farther, while the tetra-chlorinated PCBs were bound strongly to roots tissues and did not enter the transpiration stream. They also found that the woody stem of the poplar plants accumulated more PCBs than the leaves.

To further examine the applicability of phytoremediation for PCBs, the researchers' next steps were to determine if plants metabolize PCBs following uptake, and to identify the metabolic pathways. They hydroponically exposed whole intact hybrid poplar and switchgrass (Panicum vigratum) plants to PCB77 (3,3′,4,4′-tetrachlorobiphenyl) and tracked the presence its metabolites in hydroponic solution and plant tissues. Metabolism in the plants occurred rapidly; metabolites were detected only 24 hours after exposure. The experimental design enabled the researchers to separate the metabolic contributions of microbial action in the root zones, enzymatic activity, and transpiration. The researchers conducted the tests under aerobic conditions, to prevent interference from dechlorinating activity of anaerobic microbes.

According to the "green liver" concept, metabolism in plants is similar to the detoxification mechanism in animal livers because of similar enzyme systems. With this in mind, the researchers considered the identities of the metabolites as clues about the presence of specific catabolic enzymes and degradation pathways. 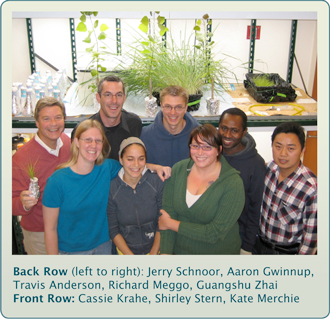 Based on metabolites detected, the researchers mapped out the dechlorination pathway for PCB 77 to the di-(4,4′-CB) congener to the mono-chlorine (4-CB) congener. They suggest that the tetra-chlorine and trichlorine congeners detected were the products of chlorine rearrangement of CB77 during metabolism by plants. While this study clearly demonstrates the rearrangement of chlorines on the biphenyl rings, the mechanism is not understood. The concentrations of the dechlorination products and chlorine-shift metabolites in switchgrass roots were lower than those in exposed poplar roots. This suggests that the enzymatic dechlorination and rearrangement capability of poplar is better than that of switchgrass.

Significance: This is the first report of metabolism of PCB congeners inside whole plants. Dr. Schnoor's work is providing information about the key role played by higher plants in the environmental fate of PCBs and how they can be used in land management strategies (phytoremediation) for the rehabilitation of contaminated waste sites.