Sequestration of Dioxin by Clays

Background: On December 30, 2009, EPA's Office of Solid Waste and Emergency Response published draft preliminary remediation goals (PRGs) for dioxin TEQ in soil, requesting comments from the public. The draft interim PRGs of 72 parts per trillion (ppt) for residential uses and 950 ppt for commercial or industrial uses are considerably lower than the PRGs established in 1998 of 1,000 ppt and within the range of 5,000 and 20,000 ppt , respectively. EPA is also considering an alternative concentration of 3.7 ppt dioxin TEQ in residential soil and 17 ppt dioxin TEQ in commercial/industrial soil based on a cancer risk level of 10-6.

While EPA address the challenges of identifying appropriate PRGs for PCDDs ("dioxins") and PCDFs ("furans") in soils, Dr. Stephen Boyd at the Michigan State University SRP is investigating the chemical and physical mechanisms that influence the sorption of these compounds to soils. Dioxins have exceptionally low solubilities in water, and so in soils or sediments they occur bound (or sorbed) to some type of geosorbent - soil organic matter, naturally occurring char, or soil minerals such as clays. Although soil organic matter is generally considered the predominant sorptive compartment (geosorbent) for organic contaminants, recent research by Dr. Boyd and colleagues 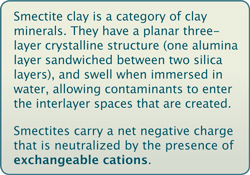 has shown that certain classes of organic contaminants have equal or greater affinities for clays. Additionally, naturally occurring clay deposits, commonly called "ball clays", are known to be contaminated with dioxins, suggesting clays as a natural repository or sink for environmental dioxins, and showing that dioxins and clays often occur together in the environment. Based on these considerations, and building on the simple fact that clays are far more prevalent, e.g. up to 50%, in soils, aquifer materials, and sediments compared to organic matter, which is often less than 1%, Dr Boyd is studying the contribution of clays to dioxin sequestration.

The large differences in sorption induced by different exchangeable cations imply that: (1) the clay interlayer is an important sorption site; and (2) the clay itself - not organic matter associated with the clay - dominates the sorption of dioxins.

They also found that planar compounds show a higher affinity than non-planar or compounds that have bulky substituents, and that clay minerals show a much greater affinity for dioxins over PCBs.

As a next step in this investigation, Dr. Boyd is examining the bioavailability of dioxins bound to clay minerals, and has begun experiments to examine the effects of clay sequestration of dioxins on their availability to a mammalian model (mouse) and biodegradative bacteria.

Significance: The Boyd research team combined structural and sorption data with FTIR and Raman spectroscopy as well as molecular simulations to examine the molecular scale mechanisms and forces responsible for dioxin sequestration. This research has shown that clays may be as or more important than organic matter in the immobilization of dioxins in soils. Dioxins might be expected to accumulate in clay minerals, possibly with inherent selectivity for certain congeners. Such sequestration of dioxins in clay minerals would have important implications for Superfund site stewardship and for bioavailability of dioxins to bacteria and higher organisms.