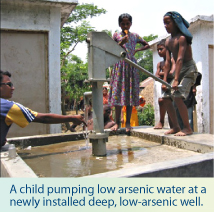 Arsenic contamination of drinking water is a significant, worldwide public health issue.  In Bangladesh alone, an estimated 35-77 million people depend on well water contaminated with arsenic at concentrations ranging from ≤10 μg/L to more than 2,500 μg/L.

Arsenic is a potent carcinogen, and arsenic exposure has been linked to toxic effects in the liver, skin, kidney, and the cardiovascular system as well. There have also been studies suggesting an association between long-term arsenic exposure via drinking water and increased mortality rates from chronic diseases. However, the latter studies are inconclusive as they rely on retrospective analysis (which introduces errors in exposure measurement) and group-level data (which requires individual-level inferences based on aggregate data).

To investigate health issues related to chronic arsenic exposure, Dr. Habibul Ahsan and a multidisciplinary team of researchers established Health Effects of Arsenic Longitudinal Study (HEALS). HEALS, which involves nearly 12,000 adults living in Araihazar, Bangladesh, was created in 2000 as part of the Columbia University NIEHS-funded Superfund Research Program, under the leadership of Dr. Joseph Graziano, and provides a valuable resource for the exploration of associations between arsenic exposure and a variety of health outcomes. For example, utilizing data from the HEALS cohort, Dr. Ahsan and his colleagues found that arsenic exposure via drinking water is associated with increased incidence of skin lesions, even at concentrations less than 100 µg/L. This study provided important evidence for arsenic toxicity and potential effects at low exposure levels.

The Columbia University SRP has made several important discoveries related to arsenic contamination of groundwater:

At the study onset, trained study physicians, who were unaware of the arsenic concentrations in the well water used by the participants, used structured protocols to collect baseline data including in-person interviews, clinical assessments, and collection of urine and blood samples. This procedure was repeated three times, at 2 year intervals.

Individual arsenic exposures were estimated based on the baseline arsenic concentration in water of the primary well, participant-reported daily consumption of water, and measured arsenic in urine.

During the study period, 407 deaths occurred.

To investigate and assign the cause of death, the research team interviewed family members or neighbors using a validated verbal autopsy questionnaire. After adjusting for potential confounders (sex, age, body mass index, blood pressure, education and smoking status), the researchers estimate that 21% of deaths from all causes and 24% of deaths linked to chronic diseases could be attributed in part to drinking arsenic-contaminated well water at concentrations greater than 10μg/L. Compared to those exposed to the lowest arsenic levels (≤10 μg/L), participants exposed to levels of 10-50 μg/L had a 34% percent higher risk of death, and those exposed to the highest level (150-864 μg/L) had a 64% higher risk.

In addition, the researchers found that once chronically exposed, decreasing exposure for a short amount of time did not reduce an individual’s risk of mortality. They plan continue to assess the modification of risk over time, and clearly state that health strategies for exposure prevention and remediation are important and should be considered.

Significance: This research documents that chronic exposures to relatively low levels of arsenic is associated with an increase in the mortality rate.  This finding is highly relevant in the nearly 70 countries, including the United States, where communities are faced with chronic low-level arsenic exposure

This study is especially strong for two reasons.  First, HEALS measures the associations between arsenic exposure and mortality at the individual level, reducing the consequences of confounding and exposure measurement error, and strengthening causal inference at the individual level. Secondly, the HEALS cohort includes arsenic concentrations at both the lower end of the dose-response curve and concentrations at the high end at which known health effects occur.  As Dr. Margaret Karagas stated, "Such data are rarely available, yet they are important for establishing rational guidelines."