Background: B cells are one of the crucial components of the humoral immune response. When stimulated, B cells in the spleen proliferate rapidly and turn into plasma cells capable of secreting large quantities of antibody specifically directed against pathogens. The environmental contaminant 2,3,7,8-tetrachlorodibenzo-p-dioxin (TCDD) suppresses this response by interfering with the B-cell differentiation process.

Dr. Norbert Kaminski, Program Director of Michigan State University SRP, is heading an interdisciplinary team of researchers from academia, the Hamner Institute for Health Sciences, and the EPA National Center for Computational Toxicology. They are investigating the effects of TCDD on the immune response and have developed a computational model representing the biochemical pathways that regulate the B cell to plasma cell differentiation process. Their model shows that TCDD interferes with the immune response by raising the threshold of antigen stimulation needed to "flip" a biological switch that initiates differentiation of B cells into antibody-secreting plasma cells. The model also suggests that, at very high doses, TCDD may be capable of flipping the switch "off"; allowing plasma cells to de-differentiate to B cells, thus ending the secretion of antibodies.

Advances: Development of the model was initiated when the research team identified the impairment by TCDD of two transcription factors critically involved in the regulation of B cell differentiation: B lymphocyte-induced maturation protein 1 (Blimp-1) and paired box 5 (Pax5). They used the primary literature to identify a third transcription factor, B-cell lymphoma 6 (Bcl-6), which is also a crucial component in this regulatory pathway. Though B-cell differentiation is regulated by a number of proteins, these three dynamically interdependent transcription factors - Blimp-1, Bcl-6, and Pax5 - form the core of the regulatory pathway. Blimp-1 functions as a master regulator, located at the center of a coupled, double-negative feedback loop formed by the mutual regulation of these three transcription factors. This feedback loop structure ensures that when Bcl-6 and Pax5 are highly expressed, Blimp-1 is repressed (as in the inactive B cell state). Conversely, when Blimp-1 is up-regulated through B cell activation, Bcl6 and Pax5 are repressed.Second, the research group added equations simulating the effect of TCDD to the model. As determined by the research team in prior B-cell studies, TCDD exerts a negative influence on Activator Protein 1 (AP-1), which starts the B-cell differentiation program by up-regulating Blimp-1.

These two processes - normal B-cell activation and its disruption by TCDD - were coupled together in a computational model described by a set of ordinary differential equations. The model demonstrated a few key points: 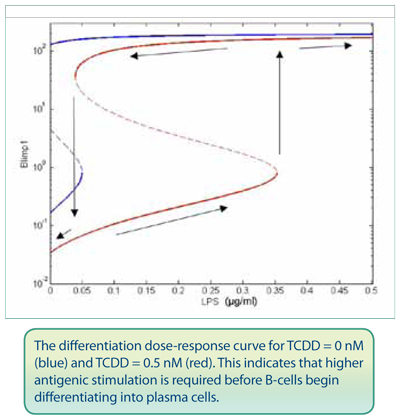 After the model was able to successfully capture behavior in a normal system, the researchers simulated several experimental scenarios. They altered the transcription rates corresponding to Blimp-1, Bcl-6 and Pax5 to simulate both their over-expression and under-expression. The model was able to reproduce experimentally observed B cell differentiation and de-differentiation.

Significance: System-level biochemical modeling is a necessary and powerful tool for health researchers analyzing biochemical pathways of toxicological relevance. Computational models are valuable in demonstrating both the normal functioning of cellular signaling pathways and the nature and magnitude of perturbations when contaminants are introduced into the system. As such, they present an alternative to traditional dose-response evaluation techniques, and can serve as a foundation for larger, more detailed stochastic models, or even tissue- and organ-scale pharmacokinetic models. These system-level models can aid the assessment of low-dose toxicity for halogenated aromatic hydrocarbons (HAH) and other contaminants.