Background: "Pump-and-treat" remediation strategies involve pumping contaminated groundwater to the surface using a series of extraction wells, treating the groundwater to remove the contaminants, and then either re-injecting the water underground or disposing of it off site. Although sites utilizing pump-and-treat are expected to need many years to reach desired clean up levels and have high annual cost, this approach is in use at nearly three-quarters of the Superfund sites where groundwater is contaminated. 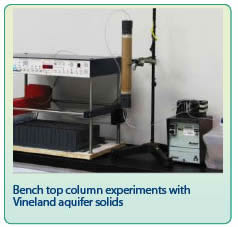 Columbia University scientists, funded by the NIEHS Superfund Research Program, hypothesized that the time frame for remediating arsenic contaminated aquifers via pump-and-treat could be substantially decreased by subsurface additions of chemical amendments. The goal is to increase the mobilization of arsenic from aquifer solids and therefore increase the amount of arsenic removed from the aquifer with each volume of water pumped out and treated.

The scientists combined laboratory experiments, hydrological modeling, and field studies to evaluate the efficacy of chemical amendments for mobilizing arsenic from aquifer solids. The most promising chemical amendment has been oxalic acid, a natural soil acid often responsible for dissolving and transporting iron and aluminum oxides in unsaturated zone soils. These oxide phases are also important on aquifer mineral surfaces. 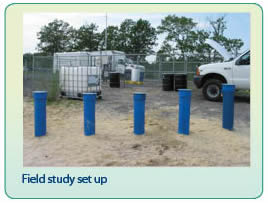 Laboratory column experiments using arsenic-contaminated aquifer solids (~80 ppm arsenic) from Vineland suggest that oxalic acid can be effective at significantly increasing arsenic mobility. Compared to 5% release when flushing with groundwater alone, >85% of the arsenic was removed from the aquifer solids with a 10 mM oxalic acid treatment. More importantly, extrapolations using these data suggest that chemical treatments could lower the Vineland Superfund Site cleanup time-scale from ~600 years with ambient groundwater alone to ~4 years with 10 mM oxalic acid, based on the cleanup goal of lowering the arsenic on the aquifer solids to less than 20 mg/kg.

During 2008 and 2009, the Columbia University scientists carried out modeling and in situ field experiments using tracers and subsurface chemical amendments to build on these laboratory results. Modeling groundwater flow and transport at the site helped design optimal locations for injection and observation wells; amendment and tracer concentrations; injection rates; and pumping rates for these experiments. In 2009, the scientists injected oxalic acid and two tracers (bromide and SF6) into a small portion (~50 m2) of the Vineland site. Groundwater samples suggest that introduction of oxalic acid led to increased arsenic release at an observation well and the nearby pump and treat recovery well. The total amount of arsenic recovered from the two wells was ~3 kg, approximately the amount of contaminant arsenic within the pilot study area.

The Columbia scientists also plan to investigate several basic science questions directed towards both the mechanisms by which the oxalic acid mobilizes arsenic as well as the eventual rates of microbial degradation and sorption of oxalic acid. Future work will investigate issues related to scaling the chemical additions to larger portions of the site.

Significance: Oxalic acid shows promise for dramatically decreasing the time required to use pump-and-treat intervention to remediate not only the Vineland Megasite, but other sites where contaminants are primarily associated with iron and aluminum oxide surfaces.

This would be an important innovation because traditional pump-and-treat technologies can be quite expensive. A 2003 survey of annual operation and maintenance costs at pump-and-treat sites reported a mean annual cost of ~$0.6M, with the Vineland Superfund pump and treatment costs at that time being the highest surveyed at $4M/yr.