Background: Chromium is an important metal that is both an essential human nutrient and has a use in a wide range of industrial applications. Where Chromium(III) [Cr(III)] is needed to process sugar, protein, and fat, the hexavalent form [Cr(VI)] is a known human carcinogen and a pervasive environmental contaminant. Cr(VI) is found in more than half of the sites on the National Priorities List, or Superfund sites, where it poses a significant threat to ground water quality.

With funding from the Superfund Research Program, Dr. Joseph Irudayaraj at Purdue University is developing a novel nanoparticle sensor to better understand the mechanism by which the bacteria Shewanella oneidensis (S. oneidensis) MR-1 is able to reduce Cr(VI) to the less toxic Cr(III). S. oneidensis is of particular interest to the research community because it is able to reduce several metals to ions of lower toxicity, and is considered to be a model bacteria for bioremediation of sites with heavy metal contamination. However, the mechanisms by which this reduction is accomplished are not well understood.

Advances: : In order to track the metal reduction mechanisms of S. onedidensis, the researchers coated 3.5 and 13 nanometer (nm) gold nanoparticles with chromate. The negatively-charged gold nanospheres were stabilized with polyethylene glycol, then incubated in an acid buffer to activate the amine groups. Finally, the nanoparticles underwent a prolonged interaction with chromate molecules, which formed a uniform layer on the gold particle surface due to the electrostatic interaction between the chromate and the amine groups on the nanoparticles’ surface. Because S. oneidensis does not naturally uptake gold in its life cycle, Dr. Irudayaraj evaluated the potential toxicity of the chromate-coated gold nanoprobes (Cr-AuNps) on the bacteria. He found no adverse effects on the microorganisms’ growth or ability to reduce Cr(VI).

Once they had determined that the bacteria were not harmed by the nanoparticles, the researchers exposed the bacteria to the 3.5 and 13 nm Cr-AuNps by incubating the bacteria and nanoprobes in lysogenia broth. The researchers also incubated bacteria with 40 nm Cr-AuNps, but the uptake rate was quite low in comparison to the other two sizes. The transport mechanism for this uptake has not been characterized, but the research community accepts that it probably occurs through the bacterial sulfate transporters, due to the structural similarity of chromate and sulfate.

Dr. Irudayaraj’s research team used surface-enhanced Raman spectroscopy (SERS) and confirmation studies with Fluorescence Lifetime Imaging (FLIM) and Inductively Coupled Plasma Mass-Spectrometry (ICP-MS) to quantitate intracellular Cr(VI) and Cr(III). These spectral mapping and chemical tools allowed the researchers to see the levels of interaction between the bacteria and the nanoparticles at the single-cell level. The images not only showed the internalization of the chromate, but also identified specific intracellular chromate reduction and localization sites within cells. In the image shown (a) denotes the presence of gold nanoparticles, (b) denotes the presence of chromate-coated gold nanoparticles, (c) denotes the unreacted chromate, and (d) denotes the reduced trivalent chromate, Cr(III). 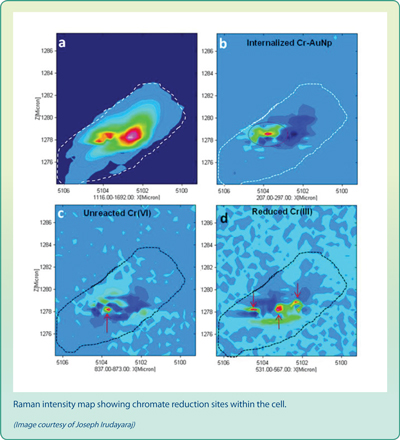 The researchers noted that some cells exhibited spectroscopic peaks indicating the presence of either Cr(VI) or Cr(III), while other cells did not show any Cr peaks. This indicates that the cells within a bacterial culture may co-exist in a range of physiological states and do not necessarily reduce metal to the same extent. Such single-cell interrogation helps to better assess the reductive state of individual cells in a colony so that effective reduction capacities can be estimated. With the appropriate integration of cell sorting tools, organisms with superior reductive capacities can be isolated for designing effective bioremediation strategies.

Significance: The ability to map processes through the use of sensitive spectroscopic tools is a significant step and complements exisiting molecular approaches by defining not only what processes are occurring within a cell, but where they are occurring at single-cell resolution.

Nanoparticles have predominantly been used for biosensing and in biomedicine to detect biomolecular targets. Dr. Irudayaraj’s work integrates SERS with multifunctional nanomaterial to monitor biomolecular interactions in bacterial cells, and points to a more fundamental application of nanotechnology in understanding cellular processes.