Poplars are Choosy about PCBs

Background: Polychlorinated biphenyls (PCBs) are transported in the atmosphere via cycles of volatilization and deposition and are found in virtually every component of the global ecosystem - water, soil, sediment, and tissues of animals and plants. The University of Iowa Superfund Research Program (isrp) studies atmospheric sources of semi-volatile PCBs, with the ultimate goal of preventing exposures or ameliorating the effects of exposures.

Dr. Jerald Schnoor directs engineering research at the isrp that focuses on remediation of sites contaminated with PCBs. Specifically, Dr. Schnoor and his colleague, Dr. Guangshu Zhai, hope to show that plants can provide in situ phytoremediation of PCB congeners scavenged from the air emanating from potential sources (e.g., dredged sediments). Where feasible, phytoremediation is considered an attractive remediation option as it is cost-effective and environmentally friendly. However, because of their high chemical stability and hydrophobicity, PCBs are not readily taken up by plants and are generally resistant to biodegradation by microorganisms.

Drs. Zhai, Lehmler, and Schnoor demonstrated that poplars can take up and translocate some lower chlorinated PCBs and can metabolize PCB3 and PCB77 (see Research Brief 182). In recent work, Schnoor's group also investigated another aspect of phytoremediation of PCBs - selective uptake and metabolism of enantiomers - and its effect on the toxic properties and environmental fate of PCBs.

Chiral PCBs were produced and released into the environment as racemic mixtures (i.e., 50/50 mixtures of the enantiomers). Detection of nonracemic mixtures suggests enzymatic selectivity of one enantiomer over another. To design and implement effective phytoremediation strategies, it is important to understand the biotransformation mechanisms in plants and to know whether plants can transform chiral PCBs enantioselectively.

Advances: Phytoremediation begins with the uptake of contaminants by roots and distribution of the contaminants throughout the plant. Using actively growing poplar plants (Populus deltoides × nigra), the research team studied uptake and translocation of PCB95 and PCB136, both highly neurotoxic chiral compounds.

The researchers exposed plants to hydroponic solutions containing 0.003 mg/L of PCB95, 0.002 mg/L of PCB135, or a blank control with no PCBs. Dead poplar plants were used as negative controls that could not biologically bind or metabolize the PCBs but could physically absorb (uptake) the PCBs and/or support microbial enantioselective transformation.

To monitor the dynamic processes of uptake, translocation, distribution, and transformation of the PCBs in different tissues of poplar plants, they collected samples after 5, 10, and 20 days of exposure and divided each specimen into hydroponic solution, root, bottom bark, bottom xylem, middle bark, middle xylem, top bark, top xylem, and leaf. 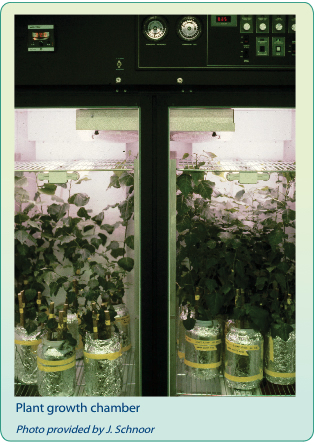 Significance: Given their huge biomass on the earth, plants likely play an important role in the enantioselective biotransformation and/or translocation of chiral PCBs. By studying the fundamental processes of PCB phytoremediation, Dr. Schnoor's group is establishing the scientific basis for the development and application of land management strategies for intervention at contaminated waste sites. This work supports the development of strategies to break the continuous cycling of PCBs between water, soil, and the atmosphere, ultimately reducing the risk of human exposures.