Foray Into Tackling the Toxicity of Environmental Pesticide Mixtures 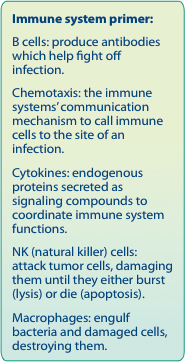 In the U.S., exposure to pesticides is widespread and individuals are often exposed to multiple pesticides throughout their lives. The pesticides chlordane and permethrin are part of this chemical milieu. Chlordane, a probable human carcinogen, is a persistent organochlorine insecticide that was widely used for termite control until its ban in 1988. Indoor exposures to chlordane likely continue because of its strong persistence. The pyrethroid insecticide permethrin is not environmentally persistent, but ranks among the most commonly applied pesticides. Permethrin is used for residential and commercial insect control, on food and feed crops, in mosquito abatement programs, and on clothing.

The immune system can be affected by environmental contaminants. This complex system is comprised of a variety of cell types including white blood cells and other immune-competent cells in tissues throughout the body. White blood cells include lymphocytes (T cells and B cells), natural killer (NK) cells, and monocytes (which can mature into macrophages and move into tissues). There are also different types of lymphocytes, each performing different functions.

Several in vitro and animal studies have shown that chlordane and permethrin can affect the immune system. Chlordane has been shown to reduce the ability of NK cells to kill tumor cells (lysis). Chlordane also inhibits chemotaxis (cell migration to inflammatory sites) and alters other immune functions that might be associated with anti-tumor processes or autoimmune diseases. Permethrin has been shown to down-regulate or inhibit several immune system processes including cell signaling in T helper (Th) lymphocytes, antibody production, macrophage function, apoptosis (cell death), and cellular immune responses. Immunological effects of chlordane and permethrin exposure in humans during development have not yet been studied.

Few studies of developmental effects of chlordane and permethrin in humans have been performed. Working with key collaborators from Johns Hopkins University and the Centers for Disease Control and Prevention (CDC), SRP researcher Dr. Rolf Halden at Arizona State University investigated developmental and immunological effects that might be associated with either chlordane or permethrin exposure.

Advances:: The multi-institutional research team set out to determine whether in utero exposure to chlordane or permethrin is associated with changes in levels of cytokines at birth. A previous study showed that exposure to these two compounds was ubiquitous among newborns. In the current study, the team measured serum levels of nine cytokines and recorded birth weight, length, head circumference, and gestational age. They then collected umbilical cord serum from 300 newborns at the Johns Hopkins Hospital, and measured concentrations of cis- and trans-permethrin, oxychlordane, trans-nonachlor, and piperonyl butoxide (PBUT) at the CDC. Permethrin is often combined with PBUT in commercial preparations to enhance permethrin’s insecticidal properties.

They found that higher chlordane concentrations were significantly associated with lower levels of the cytokine IL-1β. Because IL-1β is involved in an inflammatory immune response, lower levels of IL-1β with chlordane exposure suggest an impairment in this type of response. This change might result in a decreased ability to fight infection or destroy tumor cells in the newborns, although these parameters were not measured in this study.

Permethrin, in contrast, was significantly associated with lower levels of the anti-inflammatory cytokine IL-10. Reduced IL-10 levels might suggest increased inflammation and increases in certain types of immune system functions in the newborns. IL-10 is also important for down-regulating allergic-type responses, so decreased IL-10 might be associated with increased allergic responses and asthma.

Neither chlordane nor permethrin was associated with any changes in growth parameters or gestational age. However, TNF-α serum concentrations were significantly associated with a two-day decrease in gestational age, independent of pesticide levels in serum. TNF-α is often used in molecular epidemiologic studies as a biomarker for inflammation or infection, and as a risk factor for preterm delivery and decreased gestational age.