Research Brief 201: What a Difference a Methyl Group Makes

What a Difference a Methyl Group Makes 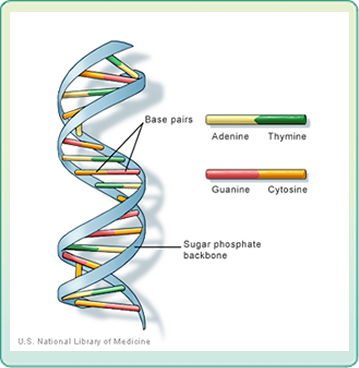 Since Watson and Crick proposed the double-helix structure of DNA in 1953, it has been thought that information in DNA is stored as a code made up of four chemical bases: adenine (A), guanine (G), cytosine (C), and thymine (T). 5-Methylcytosine (5mC) was first identified in 1925 in hydrolysates of tuberculinic acid and later in thymus DNA. It is now well known as the fifth base in DNA.

Methylation changes the configuration (shape) of a molecule. In this case, methylation of cytosine results in tighter coiling of the double helix, which can shield the underlying nucleotide from transcription and "silence" the gene(s). Thus, methylation of cytosine can result in epigenetic changes (alterations of gene activity without changing the DNA sequence; these changes can be transmitted to daughter cells).

Advances:: In 2009 and 2010, researchers determined that the Tet proteins could convert 5mC to 5-hydroxymethylcytosine (5hmC) as the sixth base. One of the research groups was led by Dr. Yi Zhang of the Lineberger Comprehensive Cancer Center at the University of North Carolina-Chapel Hill. They suspected that the Tet proteins could not only convert 5mC to 5hmC, but that the proteins went on to form two subsequent products, in what they believed was a four-step series of reactions leading back to bare-boned cytosine. They hypothesized that the failure to detect the last two reaction products in the conversion of 5mC to C was not because the predicted chemical reactions were not occurring; rather, it was because the experimental assays were not sensitive enough to detect the intermediate products.

They teamed up with Dr. James Swenberg, Director of the UNC Superfund Research Center, and Leonard Collins from UNC SRP’s Chemistry and Analytical Core to redesign the approach, switching the enzymes used to digest the DNA, using high-performance liquid chromatography (HPLC) enrichment of the expected products, and developing highly sensitive mass-spectrometry methods for rigorous identification and structural confirmation. With this assay, the researchers detected the reaction products they expected: 5-formylcytosine (5fC) and 5-carboxylcytosine (5caC), the seventh and eighth DNA bases. Importantly, they verified that Tet proteins control these methylation and demethylation processes.

The researchers then conducted studies to determine whether these reactions take place in cells and tissues of mammals. They analyzed human embryonic kidney cells (HEK293), mouse embryonic stem cells, and mouse tissues expressing elevated, reduced, or normal amounts of Tet proteins. They found that the new bases were detected when Tet proteins were present; however, without Tet proteins, 5fC or 5caC were not detected.

Significance: The Zhang and Swenberg teams confirmed that Tet proteins regulate the conversion of cytosine to 5mC and three other methylated bases. Because methylation of cytosine has significant potential for altering gene activity, this discovery opens the door to a wide array of research and application opportunities. It may be possible to use Tet proteins to control methylation that turns genes on or off, influencing how cells behave.

The findings could have important implications for both stem-cell and cancer research. It could provide researchers with new tools to erase previous methylation patterns to reprogram adult cells to pluripotency, resulting in stem cells that could give rise to any fetal- or adult-cell type. The work also could provide cancer researchers with a mechanism to reactivate tumor-suppressor genes that had been silenced by DNA methylation.