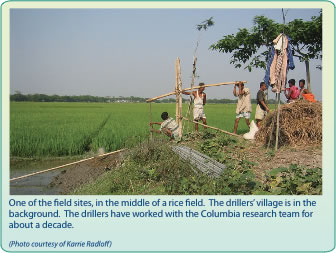 Background: Elevated arsenic concentrations are common in wells across South and Southeast Asia, and their role as a primary source of drinking water has led to large-scale arsenic poisoning across the region. To lower exposure, the use of deep-water wells, which have much lower arsenic concentrations, has increased considerably.

However, recent surveys of deep (>150m) hand-pumped wells have shown that ~15% of those in Bangladesh and ~25% of those in the most contaminated areas of West Bengal contain arsenic (As) in concentrations >10 µg/L, the World Health Organization's (WHO) guideline and EPA's maximum contaminant level allowed in public water supplies. The proportion of large scale public water supply systems in West Bengal drawing from these deeper aquifers that do not meet the WHO guideline is even higher.

Closer to home, arsenic poses a challenge across the United States as well. Arsenic is the second most common contaminant at Superfund sites, and is also present at other contaminated sites, such as old, unlined landfills. Plumes of groundwater contamination, including arsenic, move through the subsurface over time, and can pose a threat to nearby water sources. In addition, nearly 43 million Americans use private wells for their primary source of drinking water, and up to a quarter of these may be contaminated with naturally occurring contaminants, including arsenic which is found at concentrations above the MCL in 7% of wells.

Over the past decade, the Columbia University Superfund Research Program has been conducting extensive research into the health effects and remediation of elevated arsenic levels in groundwater (see Research Briefs 113, 120, 187, and 193). Karrie Radloff, a recent PhD graduate, and her advisors have been studying arsenic mobilization in the aquifers of Bangladesh. Their latest research addresses a concern that the use of deep-water wells could cause arsenic-laden water from shallower aquifers to contaminate aquifers tapped by deeper wells.

Advances: Radloff and her team of researchers determined As adsorption rates in the Bengal Basin using both in situ and batch experiments. To derive the in situ measurements,they conducted push-pull experiments, injecting aquifer water spiked with 200 µg/L As (III) or As (V) and a bromide tracer into a deep aquifer, then measuring the change in concentration over 9 days. They found that the arsenic concentration had fallen by 70% after 24 hours, and continued to decline over the monitoring period.

The research team attributes this decline to adsorption on sediments in the deep aquifer.

Batch experiments were conducted to support the field experiments by further characterizing adsorption of As (III) and As (V) using sands and groundwater from the aquifer. The researchers found that the sorption capacity of the sands was very high-40,000 µg/kg, even if the degree of adsorption decreased at the higher levels according to a Langmuir isotherm.

The field results were applied to a hydrological model of the Bengal Basin, the aquifer that serves most of Bangladesh and the neighboring Indian state of West Bengal, to identify regions that are most at risk of arsenic contamination in the future. The model of co-author Holly Michael from the University of Delaware shows that the risk of contamination of the deep aquifer is limited, in considerable part because of As adsorption, when water demand from the deep aquifer is restricted to household use, but increases significantly once irrigation water is also pumped from the deep aquifer. 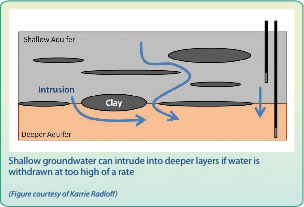 According to Radloff, the effect of As transport into uncontaminated sands is more apparent in Bangladesh, where the concentrations are higher, but similar processes play a role in the United States. The estimates of As retardation due to adsorption derived in this paper can therefore be applied elsewhere to aquifers with similar geochemical characteristics. In areas of the United States where groundwater pumping for farming has drastically altered water flow conditions, there are reasons to expect that arsenic concentrations might change more rapidly than they have in the past.

Significance: The results from this study are significant on several fronts. First, this work illustrates the need for combining batch adsorption studies above ground with in situ field experiments to increase our understanding of the processes that regulate contaminant transport. Second, the new estimates of how much As is retained on sands by adsorption needs to be taken into account to predict the effectiveness of pump-and-treat operations at numerous US Superfund sites where arsenic is a common contaminant. Third, this study illustrates the vulnerability of groundwater aquifers to increased water demands and the need for comprehensive management to limit the degradation of groundwater quality.