A Flurry of Arsenic Findings

Superfund Research Program (SRP) studies published in late 2011 and early 2012 provide new evidence about arsenic. The studies reveal unexpected sources of arsenic exposure, demonstrate that adverse health effects are linked to low levels of exposure, show the mechanisms behind some of its health effects, and suggest a strategy for reducing exposure from well water. 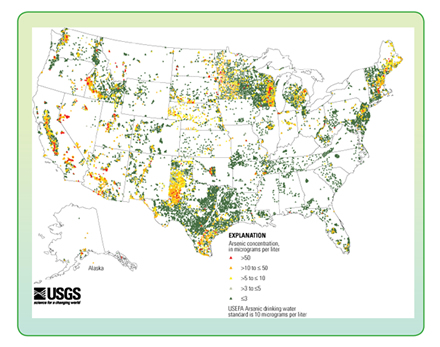 Arsenic in Common Foods
Brian Jackson, Ph.D., and colleagues at the Dartmouth University SRP, identified a previously under recognized source of arsenic exposure – common foods. They found that organic brown rice syrup, which is used in organic food products as an alternative to high fructose corn syrup, can contain significant concentrations of inorganic arsenic, the form classified as a human carcinogen. Toddler formula, cereal bars, and energy foods aimed at athletes that contained organic brown rice syrup had higher total arsenic concentrations than similar products that didn’t contain the syrup. In a second study, Jackson’s research team showed that infant formula and jarred baby foods are a significant source of arsenic exposure.

A third study by Margaret Karagas, Ph.D. and colleagues, also at the Dartmouth University SRP, showed rice consumption was associated with increased urinary levels of arsenic in pregnant women. These studies add to the growing body of evidence that food is a source of arsenic exposures and that regulation is needed for arsenic levels in food.

Clues about Disease Mechanisms
Studies have identified mechanisms of arsenic-induced disease. A team of Columbia University SRP researchers, led by Habibul Ahsan, M.D., of the University of Chicago, used genetic screening technologies to identify genetic changes that make some people more prone to skin lesions after arsenic exposure. Because the genetic changes are found near the enzyme for metabolizing the chemical into a less toxic form, the study suggests that efficient metabolism of arsenic through methylation is protective. A large body of epidemiologic evidence suggests that people who are “good methylators” are less likely to develop signs of arsenicosis. The new finding adds support for interventions that use compounds that boost methylation, such as folic acid. Indeed, Mary Gamble, Ph.D., of the Columbia University SRP, has demonstrated that folic acid supplementation facilitates arsenic methylation and elimination, thereby lowering blood arsenic concentrations. These studies were conducted among participants in Bangladesh, where about half the country’s population has been accidentally exposed to arsenic after the installation of tube wells to tap groundwater sources in the 1970s.

Another study, from Quan Lu, Ph.D., and colleagues at the Harvard University SRP, contributes to the understanding about the genes involved in arsenic-related cancer and diabetes. Researchers used a genome-wide RNA interference screen to identify human genes that mediate cellular stress induced by arsenite, the most common form of arsenic found in groundwater. Responses to this type of stress, called endoplasmic reticulum stress, have been implicated in cancer and diabetes.

Health Effects at Low and Moderate Exposure Levels
Two epidemiological studies, also from researchers at the Columbia University SRP and led by Ahsan, provide new evidence about arsenic’s effects among people exposed to low and moderate levels. A longitudinal study in Bangladesh showed dose-dependent incidence of skin lesions from chronic exposure to arsenic in drinking water, even at low levels of exposure. The risk of skin lesions persisted among people who had reduced their exposure in recent years. The other study, of a prospective cohort in Bangladesh, found that moderate levels of exposure to arsenic in drinking water was adversely associated with mortality from heart disease, especially among smokers. These findings suggest a significant synergistic interaction between arsenic exposure and cigarette smoking in mortality from heart disease.

Managing Deep-water Wells
Finally, a study led by Kathleen Radloff, Ph.D., of the Columbia University SRP, suggests that Bangladeshi citizens at risk of arsenic poisoning from their drinking water may be able to avoid illness by carefully managing deep-water wells. This research showed that arsenic migration to deep groundwater was influenced by adsorption and water demand; the risk of contamination increased significantly with increased demand. Therefore, water from deep wells can be made safer from arsenic contamination by limiting the amount of water that is pumped.