Research Brief 209: PAHs Before and After the Deepwater Horizon Oil Spill

PAHs Before and After the Deepwater Horizon Oil Spill

Superfund Research Program (SRP) researchers from Oregon State University have provided a unique glimpse into the effects of the Deepwater Horizon oil spill on water in four Gulf Coast states. The researchers, led by Kim A. Anderson, Ph.D., measured levels of bioavailable polycyclic aromatic hydrocarbons (PAHs), a family of compounds found in oil that are toxic to humans and wildlife.

Beginning in the month after the April 2010 spill, the researchers used passive sampling devices to sample the water at four sites: Grand Isle, La., Gulfport, Miss., Gulf Breeze, Fla., and Gulf Shores, Ala. The sampling was repeated eight times over the course of a year.

The study showed that at three sites, the levels of bioavailable PAHs increased significantly after the spill, and by March 2011, levels at all sites had returned to normal. But at the Alabama site the investigators found that after an initial decrease, the PAH levels and chemical profiles returned to levels similar to those just after the oil spill. "These data support the hypothesis that oil from the Deepwater Horizon oil spill may still be affecting this site," said Anderson. "This finding merits further study."

The dispersants used after the spill make chemicals such as PAHs more soluble in water and, therefore, more bioavailable. Passive sampling devices sequester and accumulate the freely dissolved (and bioavailable) fraction of hydrophobic organic contaminants, such as PAHs, much the same way that biomembranes and lipid tissues in 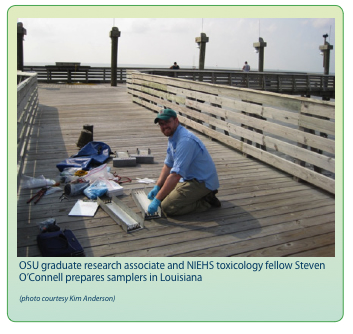 In addition, the researchers used principal component analysis (a multivariate variable reduction technique) to compare the chemical profiles of the samples obtained from the different areas over the course of the study. Prior to the oil reaching the sampling sites, the chemical profiles at all four sites were similar. After the oil appeared at the sampling sites, this analysis pinpointed the percent of each individual chemical (out of 33 possible PAHs) that was present in a given sample, which provided clues about the source of the PAHs.

The work provides measures of potential exposures to PAHs in ecologically sensitive coastal areas that touch large numbers of people, which can be used in later studies. The PAH levels found in this study were comparable within an order of magnitude to tissue concentrations found in seafood in the Gulf of Mexico following the Deepwater Horizon oil spill, and to salmon and mussel tissue concentrations observed in the Gulf of Alaska following the Exxon Valdez oil spill.

Overall, the study results suggest a continued need for monitoring of residual oil and dissolved PAHs in the Gulf of Mexico.