Research Brief 210: A New Role for MicroRNAs in Neurobehavioral Development

A New Role for MicroRNAs in Neurobehavioral Development

MicroRNAs (miRNAs) are very short pieces of RNA that may play a major role in human health and disease. Although miRNAs do not encode for protein sequences, scientists believe that they may regulate more than half of human genes that do code for proteins. In addition, genes encoding proteins that are regulated by miRNAs are twice as likely to be sensitive to environmental chemical exposure. Now, researchers at the Oregon State University Superfund Research Program (SRP) have identified for the first time several miRNAs that control neurobehavioral development in a zebrafish model.

The researchers disrupted normal miRNA signaling in zebrafish embryos with ethanol, then measured resulting changes in miRNA expression and changes in behavior, as compared to a non-exposed control group. "Taken together, our data support an integral role for microRNAs in the establishment of vertebrate neurobehavioral and skeletal systems," said Robert Tanguay, Ph.D., the senior author of the study. 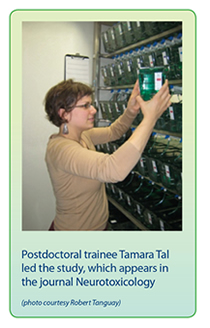 To measure behavioral changes, Tamara Tal, Ph.D., a postdoctoral fellow in the Tanguay lab, video-recorded and measured the animals' movements in response to alternating periods of light and dark. "Zebrafish detect changes in the environment-light and dark-and they respond by a change in motor responses, such as swimming," Tanguay says. Normally, five day old zebrafish swim more during dark periods that are directly preceded by a light period. That behavior was exaggerated in the exposed group. "When zebrafish embryos are exposed to ethanol only for the first day of life and then are tested four days later, they swim even more in the dark; they are hyperactive in the dark," Tanguay says. Abnormal swimming responses to changes in light conditions persisted in juvenile fish (35 days old) that had been exposed as embryos.

In the exposed group, widespread changes in levels of both miRNAs and messenger RNAs were found, using several different gene profiling studies. In addition, the scientists identified particular miRNAS that were misexpressed. They then used a method called target prediction analysis to discover messenger RNA that might be controlled by the miRNAs in question. Using that method, they predicted that some of the miRNAs misexpressed in the exposed group may bind to messenger RNAs that are involved in the formation of the brain. 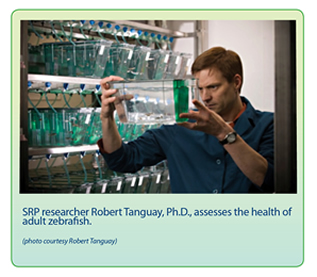 To further support a link between miRNAs and neurobehavioral development, the scientists could reproduce the observed abnormal swimming effects in larvae and juveniles not exposed to ethanol by inhibiting the production of either one of two particular miRNAS-miR-9/9* or miR-153 during development. In addition, structural analyses on adult zebrafish demonstrated that repression of miR-153c levels during development affected cranial skeletal development.

Tanguay's work not only provides evidence for a new role for miRNAs in neurobehavioral and skeletal development, but also highlights the versatility of the zebrafish model for studying the effects of developmental exposure to chemicals.