Visual dysfunction in adulthood and early-life exposure to tetrachloroethylene (PCE; perchloroethylene) contamination in drinking water are potentially linked, according to a new research study led by Ann Aschengrau, Sc.D., of the Boston University Superfund Research Program. PCE is a solvent frequently used in dry cleaning solutions, adhesives, and metal degreasers.

Aschengrau's research team investigated the impacts of PCE exposure on adult vision in a cohort born between 1969 and 1983 from the Cape Cod region of Massachusetts. In the eight towns involved in the study, a vinyl liner containing PCE was applied to pipes in the drinking water distribution system. The vinyl liner was improperly cured, leaching PCE into the water supply. 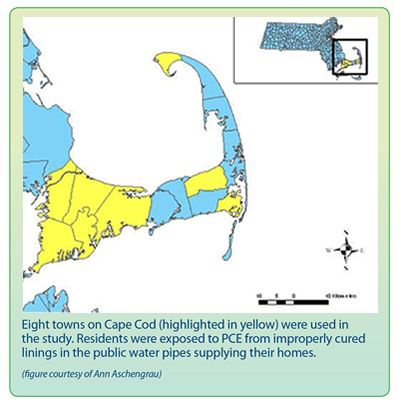 As a result of the irregular pattern of the affected pipes, the region had drinking water with a wide range of PCE concentrations when contamination was discovered in 1980. Exposure to PCE was estimated and linked to the births of women who lived in homes that were affected or unaffected based on household locations.

Investigators found that adults exposed to the solvent during gestation or early childhood, compared to those who were unexposed, exhibited poorer color discrimination and lower contrast sensitivity, two indicators of visual function. Despite some design limitations, the study not only found differences between exposed and unexposed subjects, but also uncovered a possible dose effect of PCE: higher early exposure may contribute to greater visual impairment.

Low levels of exposure to PCE have been linked to adverse neurological effects, such as decreased attention and memory. Despite this, the general population is commonly exposed to low levels of PCE in conventionally dry-cleaned fabrics and from ground and surface water contamination. Because of its prevalence, further investigation of the health effects associated with PCE exposure is warranted.

This study is the first to demonstrate the need for further investigation into the association between early-life PCE exposures and adult vision impairment. The effect of PCE exposure on vision, which is commonly impaired from exposure to neurotoxic agents, has not been well investigated to date.