A new study suggests that low-level prenatal mercury exposure is associated with an increased risk of attention-deficit/hyperactivity disorder (ADHD)-related behaviors. Conversely, children whose mothers ate more fish, the main non-occupational source of mercury exposure, during pregnancy had a lower risk of exhibiting ADHD-related behaviors. This apparent inconsistency highlights the confusion many mothers-to-be face in planning their diets.

Research led by Susan A. Korrick, M.D., M.P.H. and Sharon Sagiv, Ph.D., with funding from the Harvard School of Public Health (HSPH) Superfund Research Program (SRP) and other NIEHS grants, investigated the association of prenatal mercury exposure and fish intake with ADHD-related behavior. ADHD is one of the most common childhood neurodevelopmental disorders, affecting 8-12% of children around the world.

Scientists sampled and tested maternal hair mercury levels, a good indicator of fetal brain and blood mercury levels, for more than 400 women about 10 days after they gave birth. Researchers also asked mothers to fill out a survey about their fish consumption during pregnancy using a food frequency questionnaire, administered shortly after birth. When the children born to those women were 8 years old, researchers assessed behaviors characteristic of ADHD, which include inattention, hyperactivity, and impulsivity. Assessments included a standardized behavioral check list completed by the child's teacher and formal psychometric testing.

Mercury-associated adverse behavioral effects were not observed among children with maternal hair mercury levels less than 1 part per million (ppm). Where maternal hair mercury levels were 1 ppm or greater, increasing mercury was associated with a 60 percent increased risk of ADHD-related behaviors, such as inattention at school or poor impulse control. 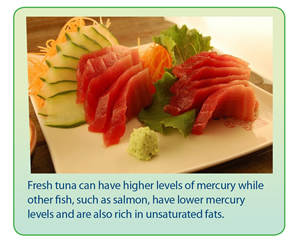 Though fish, such as tuna and swordfish, are the main source of non-occupational mercury exposure, other fish such as salmon and catfish are generally low in mercury and high in omega-3 fatty acids, which may promote neurodevelopment and offset the neurotoxic effects of mercury exposure.

The study authors did not have information on what type of fish the women ate so they could not correlate consumption of specific types of fish with ADHD-related behaviors.

“How much fish you eat is not equivalent to how much mercury you are exposed to. I think the public health conclusion is that pregnant women can benefit from fish consumption, but it's important to try to consume fish that are low in mercury,” explained Korrick.