Marine Mercury: From Sources to Seafood

Mercury released into the air and then deposited into oceans contaminates seafood commonly eaten by people in the U.S. and globally, according to findings from the Coastal and Marine Mercury Ecosystem Research Collaborative (C-MERC). In the past century, mercury pollution in the surface ocean has more than doubled as a result of past and present human activities, such as coal burning, mining, and other industrial processes.

C-MERC, which is organized and facilitated by the Dartmouth College Toxic Metals Superfund Research Program (SRP) Research Translation Core (RTC), published nine papers in a special issue (November 2012) of the journal Environmental Research. The issue is dedicated to exploring the pathways and transformations of mercury and methylmercury from sources to seafood consumers in specific marine ecosystems. A companion report, Sources to Seafood1, released in December 2012, reviews the pathways and consequences of mercury pollution across marine systems by drawing on findings from the C-MERC papers, scientific literature, and data from a range of marine systems and coastal basins.

The C-MERC reviews suggest that mercury deposited from the atmosphere into the oceans ranges from 56% in several large gulfs to 90% in the open ocean. The open ocean is home to large tuna and swordfish, which together account for more than half of the mercury intake from seafood in the U.S. population.

Approximately one-third of all mercury emissions are associated with current industrial sources and other human activities that can be controlled. Model estimates from the report indicate that methylmercury concentrations in marine fish will decline roughly in proportion to decreases in mercury inputs, though the timing of the response will vary. Models of the North Atlantic Ocean indicate that a 20% cut in the amount of mercury deposited would lead to about a 16% decline of mercury in fish.

“It is important to realize that achieving a 20% decrease in mercury deposition will require substantial cuts in current anthropogenic emissions, given the already very sizeable build-up of mercury in terrestrial environments and ocean waters,” said Robert P. Mason, Ph.D., professor of marine sciences at the University of Connecticut. Mason is a lead author of the Environmental Research paper on mercury biogeochemical cycling in the ocean and a lead author of Sources to Seafood.

The report also examines the effects of local mercury inputs in near-shore coastal waters and found a contrasting pattern to oceans. River inputs can be as much as 80% of the total mercury to some estuaries where there are large mercury sources such as historically contaminated sites, release of mercury from wastewater or industrial waste, and mercury deposition into the watershed.

“C-MERC's synthesis of research identifies the most important drivers of mercury pollution to different oceans and coastal waters, and can help policymakers understand the links between environmental processes, methylmercury levels in marine ecosystems, human exposure, and the human health effects— all of which are critical to the discussion of how local, regional, and global mercury pollution affects the world's supply of seafood," said SRP researcher and RTC leader Celia Chen, Ph.D. She is a co-author of the new Environmental Research papers on nutrient supply and mercury dynamics and mercury sources in the Gulf of Maine. Chen also authored an editorial on the subject in the Environmental Research issue and is a lead author of the Sources to Seafood report.

“The good news is that the science suggests that if mercury inputs are curtailed, mercury levels in ocean fish will decline and decrease the need for warnings to limit consumption of this globally important food source,” added Chen. 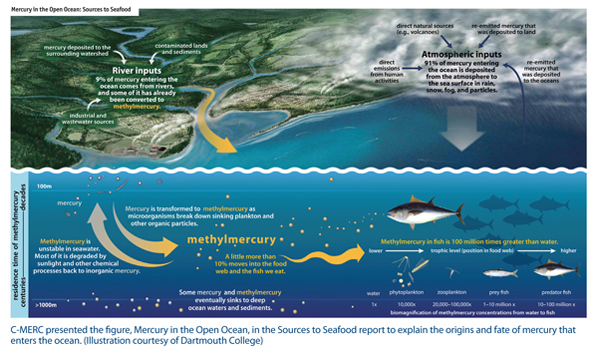 The C-MERC papers are the culmination of two years of work by approximately 70 mercury and marine scientists from multiple disciplines, including biology, ecotoxicology, engineering, environmental geochemistry, and epidemiology.

C-MERC was established by the Dartmouth SRP in 2010 to review current knowledge and knowledge gaps relating to mercury contamination of marine fish and to use science to inform policy decisions on a regional, national, and global scale. As part of the C-MERC process, the Dartmouth SRP Research Translation Core held two workshops over a two-year period for over 50 international marine mercury scientists and policy stakeholders to formulate and respond to policy relevant questions on the inputs, cycling, and uptake of mercury in ocean ecosystems and the links to fish, wildlife, and human exposure to methylmercury.