A new way to reduce hazardous polychlorinated biphenyls (PCBs) by bioaugmentation, the addition of microorganisms to degrade contaminants, could be an effective and environmentally sustainable strategy to decrease the amount of PCBs in polluted sediment. According to a new study by a Superfund Research Program (SRP) grantee at the Medical University of South Carolina, in collaboration with scientists at the University of Maryland 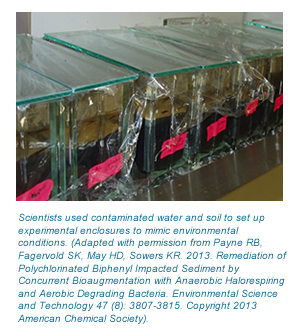 Baltimore County, the simultaneous addition of specific anaerobic and aerobic microorganisms in contaminated sediment resulted in an 80% decrease by mass of PCBs after 120 days.

Currently, the most common method for treating PCB-affected sediment is to dredge contaminated sediment and dispose of it in landfills. This process is costly, disruptive to the environment, and can lead to release of PCBs into the water column as the sediment is being removed. The results of this study suggest that bioaugmentation has the potential to be a lower cost and environmentally sustainable alternative to dredging to remove PCBs from sediments.

New ways to promote on-site degradation of PCB-affected coastal sediments were identified. Researchers created mesocosms, experimental water enclosures, with contaminated sediment and water from Baltimore Harbor, Maryland. Anaerobic halorespiring bacteria were added to convert high chlorinated PCBs to less chlorinated forms. The less chlorinated forms were then susceptible to the degrading action of aerobic bacteria, which were added simultaneously with granulated active carbon as a carrier.> 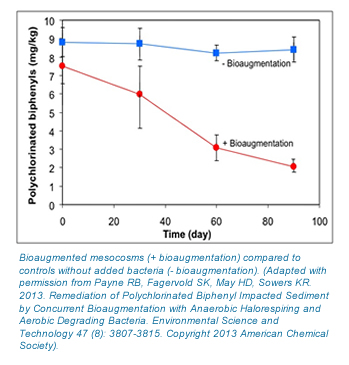 The bioaugmented mesocosms with both anaerobic halorespiring Dehalobium chlorocoercia DF1 and aerobic Burkholderia xenovorans LB400 bacteria saw the greatest effect, with a decrease by mass of PCBs from 8 to less than 2 mg/kg after 120 days. Although aerobic degradation only occurred in the mesocosms in the first 120 days, anaerobic dechlorination continued to decrease the mass of PCBs to day 365, and living anerobic and aerobic bacterial bioamendments were still detected at the end of the study. This long-term viability suggests that enhanced dechlorination has the potential to continue beyond 365 days and could result in long-term improvement of dechlorination and degradation in the sediments.

According to the study authors, although prior studies have also demonstrated that sequential anaerobic and aerobic treatments in laboratory cultures reduce the total concentration of PCBs in soils, the mesocosm conditions used in this study more closely relate to environmental settings. This study used an open air mesocosm, which created both aerobic and anaerobic zones, and indigenous water, unlike previous studies that used closed culture vessels and culture medium.

PCBs are a class of organic compounds that were used for decades in many applications including electrical transformers, capacitors, and coolants. The U.S. Congress banned all uses of PCBs in 1979, but because of their stable chemical structure, they persist in water and sediments. PCBs are known to cause a wide variety of adverse health effects including cancer, neurodevelopmental disorders in children, and other effects associated with endocrine disruption.