Research Brief 224: Effects of Cadmium and Copper on the Fish Olfactory System

Effects of Cadmium and Copper on the Fish Olfactory System

A series of studies from a research group led by University of Washington (UW) grantee Evan Gallagher, Ph.D., provide insight into the mechanisms underlying injury to the olfactory system of fish exposed to cadmium (Cd) and copper (Cu) including those concentrations seen in the environment. By understanding the metal-induced neurotoxicity in the fish olfactory system, the researchers have also identified novel biomarkers of metal exposures that may be used to assess olfactory injury in fish, such as salmon, at Superfund sites. 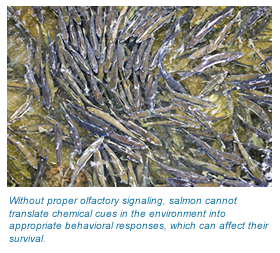 In fish, the peripheral olfactory organs are in direct contact with the surrounding aquatic environment and are particularly vulnerable to water-borne exposures to trace metals and pesticides. These exposures can disrupt key olfactory-mediated behaviors such as foraging, predator avoidance, prey selection, and natal homing, the process where salmon return to their birthplace to reproduce. According to the authors, although several studies have linked olfactory impairments to Cu and Cd, the mechanisms by which the metals inhibit olfactory function are poorly understood.

In one study, led by UW postdoctoral researcher Lu Wang, Ph.D., researchers analyzed microRNA (miRNA) profiles in the olfactory system of zebrafish exposed to up to 40 parts per billion Cu, which is within the range of those encountered from urban runoff. A major epigenetic marker, miRNAs are short noncoding RNAs that regulate messenger RNA (mRNA) translation and stability.

Researchers identified several miRNAs that may contribute to decreased mRNA levels involved in olfactory signal transduction pathways and other neurological processes. The findings have led to a better understanding of the epigenetic mechanisms of metal-induced olfactory injury in fish, and have identified miRNAs associated with metal-induced neurotoxicity that may have utility as biomarkers of metal exposures.

In a second study led by Wang, Gallagher’s research team investigated the role of cellular oxidative stress as a mechanism of Cd-induced olfactory injury in zebrafish. They also examined the role of nuclear factor (erythroid derived 2)-like 2 (Nrf2), a transcription factor involved in antioxidant response.

Results of the study indicate that oxidative stress is an important mechanism of Cd-mediated injury in the zebrafish olfactory system. Additionally, the Nrf2 pathway plays a protective role against cellular oxidative damage and is important in maintaining zebrafish olfactory function. The authors also identified molecular indicators of cell degeneration and regeneration in olfactory tissue that may help researchers gain greater insight into the effects of metal exposures.

In the third study, led by UW SRP graduate student Chase Williams, researchers examined the effects of Cd on olfactory mediated behaviors in Coho salmon. Salmon populations have declined in the western United States, with several species currently listed as extinct or endangered. According to the authors, the inhibition of olfactory processes associated with exposures to waterborne pollutants, including metals, may be a causative factor in these population declines.

Based on results of the study, acute exposures of Cd representative of heavily polluted waterways can cause olfactory injury in Coho salmon, and injury may persist following depuration. The study modeled an environmental scenario where salmon may receive transient metal exposures such as those that can occur when fish migrate through Superfund sites. Mechanism-based biomarkers of oxidative stress and olfactory structures that can enhance the evaluation of olfactory injury were identified.

“The phenomenon of Superfund chemical-mediated disruption of olfactory function has toxicological ramifications for many fish species. A loss of olfaction can disrupt the ability of fish to detect predators and prey, and in the case of salmon, homing to natal streams,” said Gallagher. “We use two interfacing models, zebrafish and salmon, to investigate molecular and epigenetic mechanisms of olfactory injury by Superfund metals to understand how the environment can impact regional survival of fish, particularly salmon.”