For the first time, an expansive study into the concentration and extended decay behaviors of environmentally persistent free radicals (EPFRs) in ambient fine particulate matter revealed the ways in which EPFRs decompose in the environment. EPFRs can cause cell damage and induce an inflammatory response which can lead to a wide range of biological damage. To put the results of the study into perspective, authors William Gehling, Ph.D., and Barry Dellinger, Ph.D., at the Louisiana State University Superfund Research Program (LSU SRP), also correlated EPFR concentrations in fine particulate matter to cigarette smoke. Their association suggests that inhaling air polluted by fine particulate matter could be the equivalent of smoking 0.3-0.9 cigarettes a day in the United States, depending on residence. 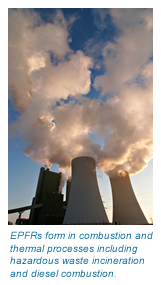 Combustion processes create tiny particles called particulate matter (PM) that is classified as fine (PM2.5) when it is 2.5-0.1 micrometers in diameter. PM provides the perfect breeding ground for EPFR formation and, by attaching to the PM, allows the EPFR to persist much longer than a typical free radical.

According to the authors, multiple studies established that increases in ambient PM2.5 levels promote cardiopulmonary dysfunction and decrease life expectancy. These health effects are induced by oxidative stress, which can be triggered when lung and other body tissue cells are overwhelmed by reactive oxygen species (ROS). Recent evidence from LSU SRP demonstrates that ROS can be generated from EPFRs in PM2.5.

"EPFR persistence on the particles directly impacts its relevance to medical research and particulate health effects exposure," said Gehling. "You can imagine if EPFRs were short lived and decay quickly, then the human exposure to EPFRs would be limited. However if they remain on the particles for a long time, you can anticipate that they will remain there when you inhale the particles or even after their translocation to internal organs."

Understanding the Nature of EPFRs in PM2.5

To understand how EPFRs decay in PM2.5  and their persistence in the environment, the researchers quantified concentration and decay of EPFRs in PM2.5 collected from an ambient air monitoring station in Louisiana. Investigators used electron paramagnetic resonance to analyze the changes in samples over time. They also analyzed the samples for the presence of phenols, possible chemical byproducts of radical decay, and used meteorological data as well as measurements of other atmospheric pollutants near the sampling site to look for correlations of the EPFR decay rate. 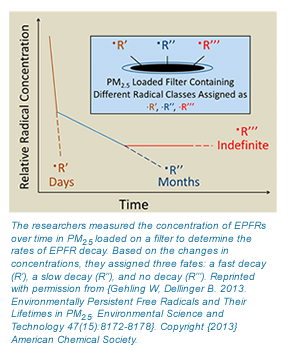 The researchers were able to attribute some decay rates to particular free radicals, improving the understanding of the types of EPFRs in PM2.5. Phenol was associated with the fast decay rate, indicating that the fast decay resulted from phenoxyl radical decay. Researchers suggested that slow decay resulted from semiquinone radical decay, and no decay was a result of radicals inside PM2.5 that were restricted by the solid matrix.

The scientists also made correlations between common atmospheric pollutants, such as ozone, and the speed of decay, indicating that photochemical processes affect initial radical concentration and can slow down fast decay rate.

When the researchers discovered the radical measurements in PM2.5 were remarkably similar to semiquinone free radicals in cigarette smoke, they developed a quick and novel way to assess adverse health effects by suggesting that inhaling air could be equivalent to inhaling cigarette smoke. According to their results, based on radical concentrations and U.S. 24-hour air quality data, each person in the United States inhales the equivalent of smoke from 0.3 cigarettes per day through PM2.5 in air. In more polluted areas, such as San Joaquin Valley, Calif., each person inhales the PM2.5 equivalent of smoking nearly a full cigarette per day.