For the first time, findings by the University of California (UC) Berkeley Superfund Research Program (SRP) provide strong evidence in humans that ingested arsenic causes cancer in specific kidney and ureter cells, called transitional cells. Other recent findings from the group suggest that people exposed to both arsenic and other known or suspected carcinogens have very high risks of lung or bladder cancer.

Millions of people worldwide are exposed to arsenic in drinking water, which is generally a result of arsenic’s natural presence in local bedrock. The International Agency for Research on Cancer has concluded that ingested arsenic causes lung, bladder, and skin cancer. However, the same conclusion has not been made for kidney cancer because of the lack of individual data on arsenic exposure and dose-response. In addition, relatively few regulations and policies have taken into account the cumulative effects of multiple agents, including arsenic, and cancer risk, primarily because of lack of data. 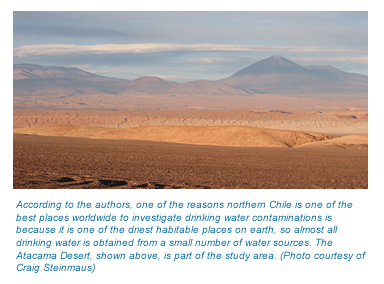 UC Berkeley SRP researchers led by Craig Steinmaus, M.D., and Catterina Ferreccio, M.D., of the Pontificia Universidad de Chile investigated the carcinogenicity of arsenic in northern Chile. The region is extremely dry, and almost all of its drinking water is obtained from a small number of public water systems. Of benefit to the researchers, records of arsenic concentrations are available for all these water systems, with many dating back more than 40 years. Individual arsenic exposures can be estimated with good accuracy by tracing the cities in the region where a person lived.

In 1958, river water from the Andes Mountains, containing high arsenic concentrations, was diverted to the largest city in the area, Antofagasta, for drinking. This led to a 13-year period where the drinking water had an average arsenic concentration of 860 micrograms per liter. With the installation of a treatment plant in 1970, these concentrations were reduced to less than 10 micrograms per liter, which is the current drinking water standard in the United States.

According to the authors, assessing past exposure is important because the time period between exposure to arsenic and arsenic-caused cancer is thought to be several decades or more. Researchers performed a case-control study, an observational study of 122 kidney cancer cases compared to 640 similar individuals without cancer, or population-based controls, in northern Chile in 2007-2010. The study included individuals who were exposed to the high levels of the arsenic contaminated river water in the 1958-1970 period. Investigators obtained individual data on drinking-water arsenic exposure to assess lifetime arsenic intake, and other potential factors that may be linked to kidney cancer. They found elevated odds of renal pelvis and ureter cancers with average arsenic intakes of 400 micrograms per day or higher. They also saw much greater odds when the median water concentrations were above 1,000 micrograms per day. The investigators did not find an association with high arsenic exposure and renal cancer.

This study is the first investigation to identify clear dose-response relationships between arsenic in drinking water and transitional cell kidney and ureter cancers using individual data on exposure and by adjusting for other factors linked to kidney cancer, such as smoking, body mass index, chronic renal disease, diabetes, urinary tract infections, and hypertension. Although the number of cases was small, the statistical significance measurements were high suggesting that these findings were not due to chance. Findings are similar to previous high-exposure studies across populations.

Cumulative Risks of Arsenic and Other Exposures 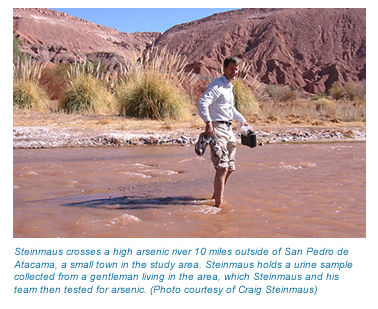 Researchers also performed a case-control study of multiple chemical exposures in 538 lung and bladder cancer cases and 640 controls in northern Chile. They collected detailed information on lifetime arsenic exposure based on water consumption and residence, smoking, secondhand smoke, and several other known or suspected carcinogens.

Their findings suggest that people exposed to a combination of arsenic in drinking water and some other known or suspected carcinogen, including tobacco smoke, asbestos, silica, and wood dust, have lung and bladder cancer risks that are 10 or more times higher than those who are unexposed to the combination of carcinogens. Results also suggest that the effects of exposure to the multiple carcinogens combined are greater than the effect of each carcinogen added together.

According to the authors, lung and bladder cancer are among the most common cancers worldwide. The synergistic effect of co-exposures identified in this study highlights the high numbers of excess cancer cases likely to be related to these combined exposures and the possible benefits of interventions aimed at reducing them.

In 1997, the World Health Organization recommended that arsenic in drinking water be recognized as a major public health issue that should be addressed on an emergency basis. Study authors conclude that identifying new contaminant-disease connections like these draws attention to the ongoing need to reduce exposures in the millions who continue to drink arsenic-contaminated water worldwide.