Researchers from the University of California (UC), Riverside, found that the addition of black carbon reduces the bioavailability, or the fraction of chemicals that can be taken up by organisms, of polybrominated diphenyl ethers (PBDEs) in sediment. PBDEs are a group of brominated flame retardants widely used in a 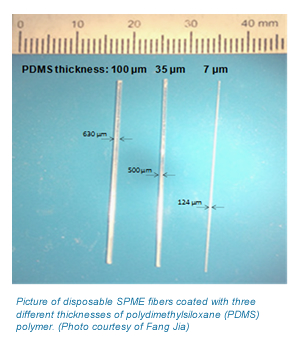 variety of consumer products. Researchers developed a method to measure PBDE bioavailability in sediment and found that reduction in bioavailability varied greatly depending on the type of black carbon; activated carbon showed the best efficiency compared to biochar or charcoal. Findings from this study may be used to optimize the selection of black carbon materials in mitigating PBDE contamination in sediments.

PBDEs can be found in automobile accessories, plastics, textiles, furnishing foams, and electric appliances. Among the different forms of PBDEs, penta-BDE has attracted the most attention because of its high prevalence and relatively high ecological toxicity compared to other PBDEs.

Penta-BDEs are long-lasting chemicals that, over time, migrate into the environment and accumulate in living organisms. Studies show that they can disrupt endocrine activity, and affect thyroid regulation and brain development. Early exposure to penta-BDEs has been linked to low birth weight, lowered IQ, and impaired motor and behavioral development in children.

Measuring Bioavailability of Penta-BDEs in Sediments

With funding from the Superfund Research Program, the UC Riverside researchers determined the bioavailability of six common forms of penta-BDE in sediments. They used an analytical chemistry method known as solid phase microextraction (SPME) to measure freely dissolved penta-BDE concentrations, which correlates closely with bioavailability. This SPME approach uses disposable polydimethylsiloxane (PDMS) fibers to detect the freely dissolved form of the contaminants in sediment (see photo).

The researchers evaluated reduction of the bioavailability of penta-BDEs 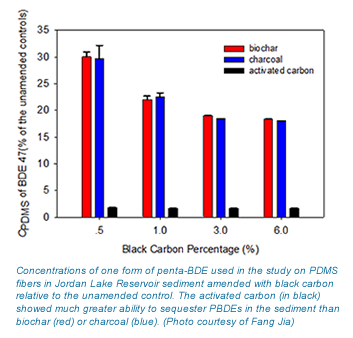 in sediments after adding three types of black carbon: biochar, charcoal, and activated carbon. Black carbon has been used as a remediation option at contaminated sites such as lakes and rivers to sequester hydrophobic organic contaminants in sediment, reducing their availability in the water column.

Understanding the Capacity to Sequester Penta-BDEs with Black Carbon

Although the freely dissolved concentration of penta-BDEs was reduced by black carbon, the reduction varied among the different black carbon types. In sediment with low organic carbon content, six forms of common penta-BDE contaminants were reduced by 47.5-78 percent (with addition of biochar), 47.3-77.5 percent (with charcoal), and 94.1-98.3 percent (with activated carbon). The sequestration was, however, more limited in sediment that contained higher organic carbon content.

Because of their persistence in the environment and known toxicity, a better understanding of remediation or mitigation of PBDEs, especially penta-BDEs, is important. Study authors lay out the significance of taking into account the type and properties of the black carbon and sediment when considering black carbon-based remediation strategies.