Prenatal glucocorticoid treatment, used to speed up the development of a preterm infant's lungs, has the potential to worsen the outcome of later exposures to toxins, according to findings by the Duke University Superfund Research Program (SRP). The study in rats, led by Ed Levin, Ph.D., and Ted Slotkin, Ph.D., explored how exposure to glucocorticoids, a type of steroid, before birth changes the effect of the insecticide chlorpyrifos on behavioral development. The findings have implications concerning the interaction of maternal stress, which increases prenatal glucocorticoid exposure, and susceptibility to later toxicant exposure.

At Duke, researchers are exploring how glucocorticoid treatment makes the developing brain more sensitive to later exposures to organophosphates, such as chlorpyrifos, the most widely used class of insecticides. Glucocorticoids are the consensus treatment for preventing respiratory distress syndrome in neonates born prior to 34 weeks of gestation. Recent studies have shown that excess levels of glucocorticoids during pregnancy can produce neurodevelopmental disorders in children. 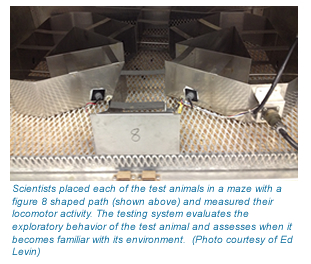 Researchers exposed pregnant rats to dexamethasone, the most commonly used glucocorticoid for preterm labor, during the stage of prenatal brain development in which glucocorticoid therapy is typically given. They then exposed offspring to chlorpyrifos after birth. The study in rats included four treatment groups: unexposed, dexamethasone alone, chlorpyrifos alone, and dexamethasone followed by chlorpyrifos. The scientists performed tests on the offspring to assess behavioral activity, emotional response, and movement.

For some behaviors, treatment of either chlorpyrifos or dexamethasone caused small but similar changes compared to unexposed rats. When rats were exposed to both chemicals, the effects on these behaviors became much larger. Behavioral abnormalities previously shown to be caused by neonatal chlorpyrifos exposure were worsened in animals that received prenatal dexamethasone treatment.

According to the study authors, the combined exposures to dexamethasone and chlorpyrifos not only cause long-term neurochemical changes, as previously reported by the research group,1 but also cause long-term functional behavioral impairments. Researchers saw differences in a spectrum of behavioral functions, including cognition, emotional response, and spontaneous behavior. 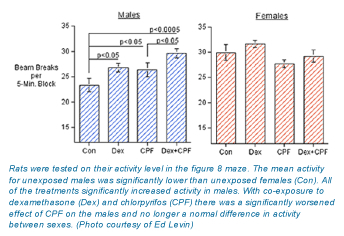 For some behaviors where rats normally have a sex difference in performance, the combined treatment either eliminated or reversed the sex difference.

Previous work by Levin and Slotkin in animals has shown that developmental exposure to chlorpyrifos interferes with sexual differences of behavioral performance.2 The new study indicates that this, too, is likely to be enhanced in subjects exposed to prenatal glucocorticoids.

According to the authors, these results reinforce the idea that an individual’s “chemical history” may be just as important as genetic differences in determining later susceptibility to environmental toxicants. The findings also have important implications for understanding the effects of maternal stress and the use of specific drugs in preterm labor on child development.