PCBs are a class of synthetic compounds grouped according to their molecular structure as dioxin-like or non-dioxin like. Although commercial production of PCBs was banned in most countries, including the United States in 1979, NDL PCBs persist in the environment and human tissues.

A neuron, also known as a nerve cell, processes and transmits information through electrical and chemical signals. Chemical synapses are the structure that allows neurons to signal to each other and to non-neuronal cells such as those in muscles or glands. These synapses allow the nervous system to connect to and control other systems of the body.

A branched projection from a neuron, called a dendrite, 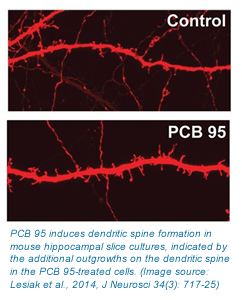 conducts signals received from other cells through synapses to the cell body of the neuron. NDL PCBs have been shown to increase the growth of dendrites by stabilizing ryanodine receptor (RyR) calcium channels when they are in their open state, increasing calcium in the cell. RyRs are critically involved in regulating calcium release, which can activate a number of proteins that control dendrite growth in the body.

In this new study, authors extended previous findings of NDL PCB effects on dendrites to dendritic spines, small extensions from a neuron’s dendrite. Dendritic spines are critical to normal neural function because they are the primary site to receive input from synapses. Dendritic spines are responsive to external cues moderated primarily by signaling pathways dependent on calcium, especially during development. Abnormalities in the density or shape of dendritic spines are associated with many neurodevelopmental disorders, including mental retardation, autism spectrum disorders, and schizophrenia.

The growth of dendrites by RyR calcium channels is dependent on the cyclic adenosine monophosphate response element binding protein, known as CREB, a factor capable of binding DNA and regulating gene expression. Researchers addressed the question of whether activation of CREB by NDL PCBs also affects the density or shape of dendritic spines.

Pinpointing the mechanism of toxicity

PCB 95, a form of NDL PCBs, was administered to neuronal cell cultures from the hippocampus of the rat brain to identify the density of dendritic spines and potential for PCB 95 to modulate the signaling pathways that normally control dendritic spine formation.

Study authors found that PCB 95 significantly increased the number of dendritic spines and synapses, indicating abnormal growth and signaling. This also coincided with an increase in the production of a specific short non-coding RNA molecule, miR132, which functions to regulate protein expression via inhibition of mRNA. Specifically, miRN132 suppresses the creation of the protein p250GAP that regulates the formation of synapses between neurons, or synaptogenesis.
Although synaptogenesis occurs throughout a human’s life, synapse formation peaks during early brain development, making this an important period for normal neurodevelopment and a potentially critical window of susceptibility for PCB exposure.

These results demonstrate a novel mechanism of PCB developmental neurotoxicity where RyR sensitization modulates spine formation and synaptogenesis by increasing the production of miR132. Because miR132 interacts with several proteins involved in cognitive impairment and autism spectrum disorders, the authors speculate that PCB 95 exposure may contribute to increased risk for similar neurodevelopmental disorders. 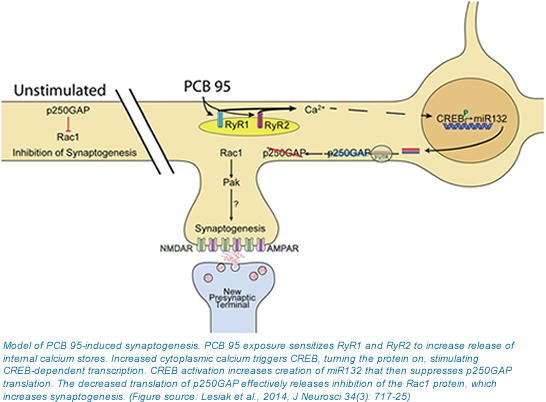