Research Brief 232: Understanding the Movement of Inhaled PCBs in the Body

Understanding the Movement of Inhaled PCBs in the Body

Researchers at the University of Iowa Superfund Research Program (Iowa SRP) have found that a form of polychlorinated biphenyls (PCBs), known as PCB11, is completely absorbed and then rapidly eliminated from the body when inhaled. They also identified the PCB11 metabolites that would best serve as markers of exposure to the chemical in urine.

Despite the 1979 phase out of PCBs in manufacturing, the PCB11 form of the chemical is still released as a by-product of pigment manufacture. To better understand the potential risk of PCB11, researchers at the Iowa SRP led by Peter Thorne, Ph.D., conducted a study in rats to show how PCB11 enters and moves through the body.

The study is the first of its kind to address uptake, distribution, metabolism, and excretion of PCB11, a chemical that Iowa SRP researchers have found in air and that has also been detected in water, sediment, and consumer goods. PCB11 has been shown to inhibit thyroid hormone activities as well as some brain functions, but there is still a need to model the biological fate of PCB11 to improve our understanding of its health effects.

Uptake and Distribution of PCB11 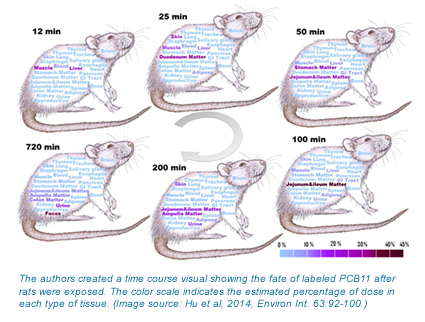 Previous inhalation studies by the research group revealed that although airborne PCBs usually cleared the body quickly, clearance time differed substantially by organ. In this study, researchers exposed rats to PCB11 labeled with radioactive carbon so they could measure the uptake and distribution of the PCB11 and its metabolites in 34 tissues and five body cavities, as well as excreted compounds.

The research team found that 99.8 percent of PCB11 was absorbed into the body after lung exposure, and within 12 minutes it reached 41 types of body tissues, gastrointestinal content, and excreted compounds.

Although most of the PCB11 and its metabolites were eliminated quickly, 20 percent of the radioactive label from the PCB11 remained in liver and blood cells more than three hours after exposure. According to the authors, this likely came from binding of PCB11-derived products to cellular proteins and DNAs. The formed cellular complexes, or adducts, are commonly found in the metabolism of other PCBs. The abundance and persistence of these adducts, which are genotoxic and mutagenic, accentuate the concern for long-term health risks of exposure to PCB11, despite quick elimination from the body.

Airborne PCBs in the Environment

This study is one of many at Iowa SRP examining the movement of PCBs in the environment and their health effects. A number of Iowa SRP studies have demonstrated that people are widely exposed to airborne PCBs.

Iowa SRP research studies revealed that PCB11 is abundant throughout air in Chicago and indoors in both new and old buildings.1 Recently, Iowa SRP researchers discovered that more than 60 percent of 85 women from East Chicago, Ind., and Columbus Junction, Iowa, had traces of PCB11 in their blood.2 They also found PCBs in commercial pigments commonly used in paint as well as inks, textiles, paper, cosmetics, leather, plastics, and food.3

Given the abundance of PCB11 in the environment, studies to understand its movement through the body and biological effects such as this one are crucial to assess risk moving forward.