Researchers led by Catherine Koshland, Ph.D., from the University of California, Berkeley Superfund Research Program (SRP) have developed an inexpensive, easy to use, and highly sensitive sensor to measure how much mercury is in liquid or aqueous samples. The sensor uses a film of gold nanoparticles to measure mercury concentrations down to 1.5 nanograms per liter.

Coal burning, energy production, and mining and industrial activities have increased levels of mercury in the environment, and this contamination ends up in the world’s oceans, where it accumulates in marine life. Fish consumption is one of the primary ways people are exposed to mercury, which has been linked with neurotoxicity, especially in young children.1,2 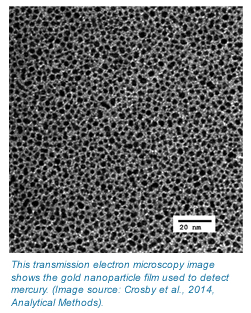 Methods currently used to detect aqueous mercury, such as cold vapor atomic fluorescence spectroscopy (CVAFS), are complex and expensive. Simple and less expensive sensors would permit more frequent monitoring of mercury levels in more locations, which would provide information that could improve modeling of how mercury moves through the environment and help target remediation efforts to precise locations. Ultimately, a better understanding of mercury levels around the world would help improve health outcomes, especially in regions where there has been little measurement of the contaminant.

Tests showed that the sensors based on the gold nanoparticle films could directly detect mercury concentrations of interest to water managers and remediation projects. For example, the 2.0 micrograms per liter EPA drinking water standard for ionic mercury falls within its range of detection.

To evaluate the ability of their sensor to determine mercury concentration in aqueous samples, the researchers prepared and tested nine contaminant-rich reference samples at six different mercury concentrations. The procedure to test each sample took approximately 90 minutes, which included about 30 minutes of sample exposure. Measurements from these samples showed a linear relationship between mercury concentration and the shift in optical absorbance measured by the spectrometer. The sensor was also sensitive to mercury from field samples that contained ammonia, arsenic, chromium, copper, lead, nickel, and mercury concentrations from 1.5 nanograms to 10 micrograms per liter.

To create the sensor, the researchers created a monolayer film of gold. 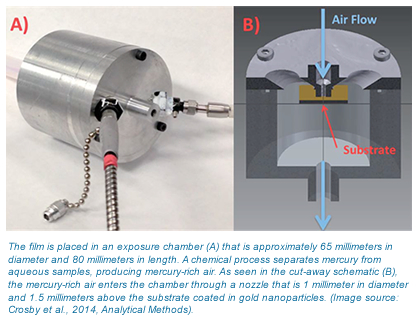 They used gold nanoparticles with an average diameter of 4.4 nanometers and an optical absorbance peak in the visible spectrum. They deposited these nanoparticles onto a quartz substrate and then exposed the gold-coated substrate to oxygen plasma to remove the organic surface layer.

Mercury readily adsorbs onto gold surfaces, creating a change in the nanoparticle film that is optically detectable by spectrometry. When excited by light, the adsorbed mercury shifts the peak optical absorbance of the gold nanoparticles’ electron charge oscillations, or localized surface plasmon resonance.

A chemical process adapted from U.S. Environmental Protection Agency (EPA) method 1631 was used to separate mercury from aqueous samples. The process produces mercury-enriched air that is directed onto the gold-film chip, which is mounted on a temperature-controlled mirror inside an exposure chamber. In addition to temperature regulation, the mirror directs light from the sources to the UV-visible spectrometer, which is coupled to the exposure chamber with optical fibers. Any mercury present will shift the film’s optical absorbance, which is measured by the spectrometer and analyzed. After each use, heating the detector to 383 K for 20 minutes regenerates the gold film.

Advantages of the gold nanoparticle sensor

According to the researchers, the gold nanoparticle films could also be used to analyze solid samples such as sediment, biological samples, soils, waste sludge, geologic samples, and coal. Prior to analysis, solid samples would go through a preliminary digestion step and then a chemical process similar to the one used for the aqueous samples.