Researchers from the Boston University (BU) and Duke University Superfund Research Program (SRP) Centers found that components of the flame-retardant mixture Firemaster® 550 (FM550) may stimulate growth of fat cells and reduce bone health. The results of the collaborative study suggest that triphenyl phosphate (TPP), a component of FM550 that is widespread in household products and house dust, interacts with a protein that regulates fat cell differentiation and lipid storage. 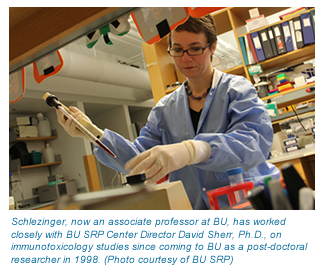 “TPP is everywhere in our indoor environment, so our finding that TPP is biologically active is significant and warrants further investigation,” said BU SRP project leader Jennifer Schlezinger, Ph.D., who led the study. “This calls attention to the fact that we need to be considering the contributions of environmental toxicants such as TPP in obesity and loss of bone health.”

Alternative flame retardant use has increased since the phase out of pentabromodiphenyl ethers (PBDEs) because of concerns about the tendency of PBDEs to concentrate in human tissues and potential human health effects such as neurodevelopmental delays. Other chemicals are currently used to meet flammability requirements, including FM550, which is found in foam-based products such as couch cushions and other household items. FM550 was recently identified as a common contaminant in household dust,1 but little information is available on how people are exposed to these new flame retardants or their potential health effects.

Working Collaboratively to Understand the Problem

“We pursued this work because of results from a small-scale study in pregnant rats led by Heather Stapleton, Ph.D., at Duke SRP. She found that perinatal exposure to FM550 in rats was associated with weight gain at low exposure levels,”2 said Schlezinger. “By collaborating with the Duke SRP Center, we were able to pool our resources from the biology and chemistry side of things to look at biological effects on cells and to see how the chemicals bind to regulators in the body.”

Because peroxisome proliferator activated receptor gamma (PPARγ) is known to regulate the development of fat cells in the body, scientists tested the ability of FM550 to bind and activate this protein. Researchers also used multipotent cells from bone marrow, which can form fat cells or bone cells, to assess changes in response to exposure to TPP and other components of FM550.

The alternative flame retardant mixture FM550 was shown to bind and activate PPARγ. The BU Computational Modeling Core, an integral component of the BU SRP, was able to simulate how FM550 fits into the PPARγ binding site. This interaction with PPARγ is likely the reason why FM550 was also shown to stimulate development of fat cells, which may contribute to obesity.

PPARγ also plays a crucial role in stimulating formation of fat cells in bone marrow, which suppresses the formation of osteoblasts, or bone cells. By activating PPARγ, components of FM550, including TPP, potentially have detrimental effects on bone health and may accelerate osteoporosis by suppressing osteoblast formation. Based on the findings, the researchers concluded that TPP is likely a major contributor to the biological actions of FM550.

By collaborating with Tom Webster, Ph.D., a BU SRP project leader, the scientists were able to estimate children’s exposure to TPP from house dust using an indoor exposure model. Models in the study suggest that exposure to house dust is a major source of exposure for young children at home, with inhalation and skin absorption of TPP also playing a role. Previous findings by co-author Stapleton also suggest that toddlers have a significant amount of exposure to flame retardant chemicals because they transfer house dust particles from their hands to their mouths.3 According to the authors, this study validates the association between TPP and health effects and given that TPP is very common in house dust, continued investigation in warranted.