Scientists from the Brown University Superfund Research Program (Brown SRP) have taken a step toward providing a simpler, accurate screening method to determine whether chemicals in underground sources are seeping into buildings and contaminating indoor air. Led by Eric Suuberg, Sc.D., P.E., the researchers developed process models, basically numerical equations, to predict the concentrations of vapors that enter indoor environments. Published in a series of three papers, results from the process models were consistent with advanced computer modeling techniques.

Vapor intrusion involves the movement of contaminants from beneath a home or a business up into the air inside the building. The vapor source is typically groundwater that contains low to moderate concentrations of either chlorinated solvents, such as trichloroethylene (TCE), or petroleum-related compounds, such as benzene. The importance of measuring vapor intrusion is that even in low concentrations, long-term exposure to these volatile chemicals may pose an unacceptable risk of chronic health effects.

Screening for Contaminants in the Field 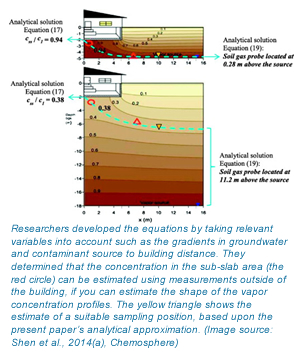 “In a suspected vapor intrusion site investigation, the first step is to establish whether there is a complete exposure pathway from a groundwater source to the indoor environment,” said Suuberg. “This is where these process models are of value.”

For some time, the U.S. Environmental Protection Agency (EPA) has offered a simple one-dimensional model of the vapor intrusion process, known as the Johnson-Ettinger model, which can be used to determine whether a particular site was a candidate for further investigation. However, according to Suuberg, it has for some time been debated how well a one-dimensional model captures a three-dimensional problem in the field. Thus, the Brown SRP vapor intrusion team began to develop three-dimensional computer models of the processes.

“While we have done a lot in the direction of developing full three-dimensional computational fluid dynamic models of vapor intrusion, not all field practitioners are ready to make the investment to learn how to use advanced computer modeling tools,” said Suuberg. “For this reason, we have sought to provide them with different tools to address this issue that provide a simpler method to estimate contaminant vapor concentration in vapor intrusion situations.”

In one paper, Shen et al. (2014a) present a numerical method to estimate the vapor concentration beneath a building, or sub-slab, using a closed-form analytical equation. The solution can approximate three-dimensional computer modeling results but does not require the use of actual advanced numerical simulation. This method allows prediction of the sub-slab vapor concentration profile beneath a building's foundation for various source configurations, given inputs of building dimension and source depth.

A second paper by Shen et al. (2014b) went one step further with a new closed-form analytical equation that predicts subsurface contaminant vapor concentrations based on measurements some distance away from the building. This work explored the relationship between vapor concentrations directly below and surrounding a building. This additional equation is useful because it can estimate concentrations of contaminants beneath a building from measurements performed at a distance, which is less intrusive to occupants.

These three papers present simple tools that can be used to determine whether further analysis is needed to assess risk from vapor intrusion. Although these analytical tools are a great first step, Brown SRP researchers continue to recommend advanced modeling techniques to analyze more complicated scenarios and better understand variability in vapor intrusion concentrations that come from large changes in indoor air contaminants over time or differences based on soil properties. According to Suuberg, when an in-depth conceptual model of a site is available, the consultant or environmental engineer has a terrific tool to begin the design of an appropriate remedy.