Remediation of Contaminated Groundwater by Persulfate

Researchers at the University of California (UC) Berkeley Superfund Research Program (SRP) are one step closer to developing more efficient and effective treatment systems to remove organic contaminants from groundwater and soil. Findings from a new study, led by David Sedlak, Ph.D., provide insight into adding persulfate to groundwater to break down organic contaminants, such as polychlorinated biphenyls, 1,4-dioxane, and components of petroleum, that may be difficult to treat with other methods and potentially harmful to human health. 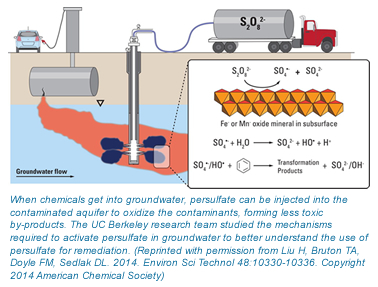 Persulfate is a relatively inexpensive compound that is increasingly used for in situ chemical oxidation (ISCO) of organic contaminants. ISCO is a way of cleaning up groundwater by pumping an oxidizer such as persulfate into the contaminated groundwater. The persulfate is converted into radicals, which are much more reactive, that convert the hazardous chemicals into other compounds that are generally less toxic and more easily degraded. Although persulfate’s use has increased, there is still an incomplete understanding of how it is converted into reactive radicals that degrade hazardous chemicals.

UC Berkeley scientists investigated the reactions of persulfate when it is injected into contaminated aquifers. They also measured how these persulfate reaction rates are affected by naturally-occurring minerals and the presence of different salts and dissolved ions.

Injection of persulfate into aquifers is typically accompanied by the addition of other chemicals, such as sodium hydroxide or chelated iron, which make the persulfate more reactive to contaminants by converting it into reactive radicals. The research team found that adding these activator chemicals may be unnecessary because persulfate can be activated by naturally-occurring iron and manganese-containing minerals in aquifers. This not only reduces the need for additional chemicals, but also allows for prediction of the activation rate based on the iron and manganese contents of the aquifer being treated.

The researchers investigated the rate of persulfate decomposition when injected and the distance it travels within the aquifer. Results of the study show that persulfate decomposition in the water is much slower than some other common treatment chemicals. Because it stays stable for longer, this indicates more effective transport and delivery over a longer distance. 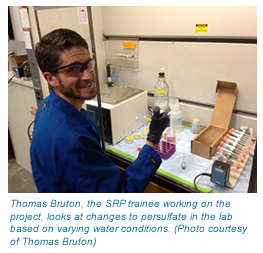 The study authors also reported that the rate of persulfate decomposition, which indicates that the compound is becoming reactive, is accelerated when it reaches a highly contaminated area. Persulfate decomposition is also accelerated in the presence of clays, in addition to iron and manganese, which are all frequently associated with regions of lower water flow where contaminants often accumulate. Because persulfate decomposes slowly in areas of lower contamination, there is ample time for the compound to migrate to zones where clays, iron and manganese, and contaminants accumulate and then accelerate its conversion to a reactive oxidant that can react with nearby contaminants.

According to the authors, the study findings provide insight into persulfate ISCO treatment that has the potential to substantially reduce the costs of remediating contaminants in groundwater that may be difficult to treat with current methods. The research also provides information to improve our understanding of when ISCO will be an effective method to reduce the health risks of chemicals from hazardous waste sites.