In a recent study from the University of Michigan School of Public Health, NIEHS Superfund Research Program (SRP), scientists reported that in pregnant women, exposure to phthalates, found in plastics and personal care products, was associated with increased levels of oxidative stress, which damages the body’s proteins, lipids, and DNA. The findings may help scientists better understand the mechanisms involved in pregnancy complications, such as preterm birth, which are associated with exposure to phthalates. 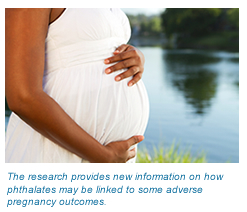 Although they are metabolized and excreted quickly, their high-volume use in products such as lotions and perfumes exposes a majority of the U.S. population to phthalates daily. According to the authors, phthalate metabolites are consistently detected in urine of pregnant women worldwide.

The scientists found an association in pregnant women between urinary phthalate metabolites and higher levels of biomarkers of oxidative stress, which is a disturbance in the balance between the production of free radicals and antioxidant defenses.

"It is not fully known what the impacts of increased oxidative stress on pregnancy might be, but this is an active area of research,” said John Meeker, Sc.D., a professor at the University of Michigan and leader of an SRP-funded project on phthalate exposure and molecular markers of preterm birth as part of the Northeastern University SRP Center. “We recently showed in another analysis among the same cohort of women that biomarkers of oxidative stress were associated with increased risk of preterm birth. Other effects, such as adverse fetal development and maternal health complications, may also be related to oxidative stress.”

The new study took advantage of urine samples from a large cohort of pregnant women recruited from 2006-2008 at Brigham and Women’s Hospital in Boston and followed throughout pregnancy. The researchers measured each subject’s urinary phthalate metabolites and oxidative stress biomarkers at up to four different time points during pregnancy.

The scientists measured two oxidative stress biomarkers, 8-OHdG and 8-isoprostane, because they are well-documented to represent oxidative damage to DNA and lipids, respectively, and have been associated with adverse health effects. 8-OHdG-indicated oxidative stress in the intrauterine compartment has been associated with two pregnancy complications, preeclampsia and intrauterine growth restriction. Increased levels of 8-isoprostane have been shown to be directly involved in preterm birth. Because the study shows that phthalates are associated with increases in both oxidative stress markers, the authors suggest that exposure to phthalates could adversely impact pregnancy in a variety of different ways.

“We found that the links between the phthalate metabolites and biomarkers were very strong,” said Meeker. “We plan to conduct more in-depth studies to shed light on how exactly this may be occurring and the full downstream consequences of these findings.”

Earlier this year, the research team reported findings in a study in Puerto Rico that were consistent with these new results.1 As part of the SRP-funded Puerto Rico Testsite for Exploring Contamination Threats (PROTECT) cohort study, the scientists found an association between urinary phthalate metabolites and biomarkers of inflammation and oxidative stress in a smaller study of women. To the authors’ knowledge, the two studies are the first to associate phthalate exposure in humans with increased oxidative stress biomarkers in pregnancy.