A collaborative study showed that long-term exposure to triclosan promotes the growth of liver tumors in laboratory mice, raising concerns about its safety for humans. Triclosan is a common antibacterial chemical used in a wide variety of consumer products such as cosmetics, soaps, detergents, and toothpaste. The study was performed by Superfund Research Program (SRP) scientists from the University of California (UC) San Diego and UC Davis and appeared in the Proceedings of the National Academy of Sciences. 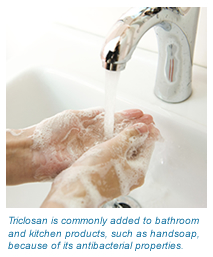 According to the authors, triclosan has become one of the most common additives used in consumer products and has been found in 97 percent of breast milk samples from lactating women and in urine of nearly 75 percent of people tested. Triclosan is also listed as one of the seven most frequently detected compounds in streams across the United States and approximately 1,500 tons continue to be produced annually worldwide.1

"Triclosan’s increasing detection in environmental samples and its increasingly broad use in consumer products may overcome its moderate benefit and present a very real risk of liver toxicity for people,” said study leader Robert Tukey, Ph.D., director of the UC Diego SRP Center."

As stated by the study authors, although triclosan has been tested in cell-based platforms with no detectable carcinogenic activity, triclosan in vivo has been largely unexplored. Scientists investigated long-term exposure to triclosan in mice by treating them with triclosan for six months, which is roughly equivalent to 18 human years. They then looked at the effects on the liver compared to mice that were not exposed to triclosan.

Researchers found that chronic exposure to triclosan in mice causes liver damage and liver cell death. They also found that triclosan exposure in mice increased susceptibility to tumor formation through enhanced cell growth, liver fibrosis (excessive accumulation of proteins in the liver), and proinflammatory responses, which are characteristics within which human cancer forms.

Scientists discovered that triclosan interferes with the constitutive androstane receptor, which plays a role in detoxifying the blood. To compensate for this interference, the liver overproduces cells, which can lead to fibrosis and cancer. According to the authors, evidence from this study indicates that triclosan plays a role in promoting liver fibrosis, which can lead to liver cancer.

Although the animal studies used higher concentrations than generally predicted for human exposure, the study indicates that triclosan can promote tumors in the liver and that the way triclosan acts on the mouse may be relevant to human physiology. The study authors concluded that because of this new evidence, the potential of triclosan to cause liver cancer in humans should be evaluated.

"We could reduce most human and environmental exposures by eliminating uses of triclosan that are high volume, but of low benefit, such as inclusion in liquid handsoaps," said Hammock. "Yet we could also, for now, retain uses shown to have health value – as in toothpaste, where the amount used is small."