We are at a crossroads when it comes to reducing the risk of adverse health outcomes from arsenic in private well water in the United States, according to Yan Zheng, Ph.D., professor at the City University of New York and community engagement leader at the Columbia University Superfund Research Program (CU SRP), and Joseph Ayotte, P.G., a U.S. Geological Survey hydrologist. To address this issue, Zheng and Ayotte wrote a summary paper and co-edited a special section on arsenic for the Science of the Total Environment (STOTEN) journal. They claim we have a better understanding of factors influencing arsenic occurrence in well water and its health effects, but little knowledge about what actions households with private wells have taken to reduce arsenic exposure and the reasons for taking those actions. 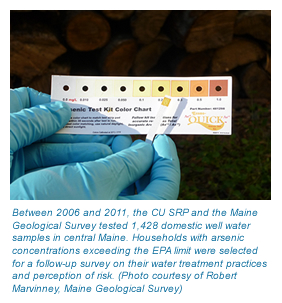 For the 43 million people in the U.S. using private wells, testing the water to ensure the safety of their drinking water is the responsibility of the well owner. This is a public health concern because arsenic is widespread in the groundwater of several regions, including New England. Arsenic in drinking water has been linked to a variety of adverse health outcomes, including cardiovascular disease, child development impairment, diabetes, and skin, bladder, and lung cancers. A study in Maine by CU SRP, for example, found exposure to arsenic via well water consumption harms children's IQ.1

The summary paper by Zheng and Ayotte is the first in a collection of 13 papers in the STOTEN special section that provide state-of-the-art information on arsenic hydrogeochemistry, effectiveness of household well treatment systems, and the testing and treatment decisions of private well owners in several northeastern U.S. states and in Nova Scotia, Canada. Five papers in the special section are co-authored by CU SRP scientists, former trainees, and their partners.

Two of the studies, led by a City University of New York, School of Public Health doctoral student and CU SRP trainee Sara Flanagan, delve into influences on well water testing and treatment in Maine, where approximately half of the population relies on unregulated private well water. 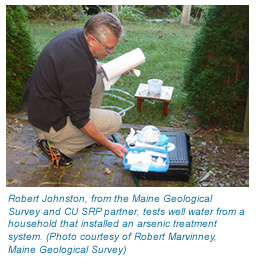 The researchers found that 41 percent of well owners in the central Maine study area have never tested for arsenic. While those surveyed agree that arsenic-related health risks can be severe, homeowners felt low personal vulnerability and tended to underestimate their arsenic risks, even compared to how they perceived their neighbors’ risk. The authors conclude that as long as private well testing and treatment are left up to owners, there will always be people exposed to arsenic though drinking water.2

A second study involved rural central Maine households who were notified 3-7 years earlier that their well water contained arsenic above the EPA limit, after their water was tested as part of a CU SRP study to understand the spatial pattern of groundwater arsenic occurrence in Maine.3,4 The researchers found that, even when homeowners were directly provided water quality results, nearly one-third of households in the study still did not take action to reduce exposures. Of the households that did install arsenic treatment systems, 15 percent of those systems failed to produce water below the EPA limit, indicating a risk that households could unknowingly remain exposed unless they vigilantly monitor their water quality. The authors conclude that well owners clearly need more support and guidance if arsenic exposure is to be reduced significantly at the population level.5

In their summary paper, Zheng and Ayotte suggest that an overall, long-term strategy is needed to reduce exposure to arsenic in vulnerable populations, such as low-income families with children and pregnant women, in regions with high levels of arsenic in well water. Interventions tailored toward these vulnerable populations have been applied to other environmental health issues in the past, such as lead-based paint and mercury in fish.

The authors say that treating contaminated wells may not be the only way to reduce exposure. Developing alternative water sources for private wells, such as new designs for glacial aquifer wells, may also be an option to reduce arsenic levels in private wells. They also recommend the development of an exposure-reduction tool box that includes the best available guidance on testing and treating alternative water sources, and reducing exposure to arsenic.

Zheng and Ayotte conclude that more consideration is needed on the range of options to reduce exposure to arsenic in areas prone to high levels in well water to encourage well testing, treatment, access to alternative water sources, and possible implementation of local, state, and regional private well water regulations.