By sampling wind-blown dust and aerosol, researchers from the University of Arizona Superfund Research Program (UA SRP) have measured airborne metal and metalloid contaminant dispersion patterns from mining operations. It is difficult to discriminate between sources of lead and other metal and metalloid contaminants by only measuring total concentration. Because each source of lead may have a specific composition of isotopes, lead isotopic analysis is a way to distinguish between contamination sources. UA SRP researchers demonstrated that this “fingerprinting” technique can be used to identify and allot the sources of contamination from mining operations. Thus, while using an existing technique in a new way, the UA SRP researchers measured the extent of soil contamination near a mine and smelter while verifying the use of lead isotope analysis to identify contaminant sources.

Measuring Contaminants at Sites in Arizona 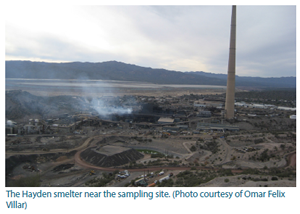 Researchers led by Eric Betterton, Ph.D., sampled atmospheric dust and aerosol at a site in the towns of Hayden and Winkleman, where a copper mine and smelter currently operate. While mining removes minerals from the earth, which can create waste containing lead and other metals, smelting extracts the copper from other minerals by a process involving heating and melting, which can release smaller particulates into the air. The investigators also sampled at a site in Tucson, representing a local urban environment, to identify and compare regional background levels with those from the Hayden-Winkleman site.

At the Hayden-Winkleman site, researchers identified two different lead sources: one associated with regional background levels that show the same isotopic composition as lead added to gasoline in the past, and one with isotopic compositions associated with fine particles originating from smelter sites, a result of condensation of high temperature vapors. They also found relatively high concentrations of lead and arsenic in the atmospheric particulate, which suggests that the main source of contamination is from the smelting activity, and not from erosion of mine waste.

The researchers validated the lead isotope method by measuring ratios and comparing them to known contaminant deposition patterns. Samples from the topsoil show lead and arsenic levels decrease with distance from the smelter along with lead isotope ratios characteristic of smelting emissions. At soil depths below 100 mm, isotope ratios decrease with distance from the smelter. These results are consistent with a contaminant deposition pattern from windblown particles from a smelter site to surrounding soils.

In semiarid environments such as the Southwestern United States, mining operations are an important source of airborne metal and metalloid contaminants. Trace metals can be mobilized through dispersal of dust particles emitted from mine waste as well as metals in the form of fume and particulate matter from smelting operations. Characterization of airborne dust in regions influenced by mining activity can provide information about sources, fate and transport, and the potential for human exposures.

Dust characterization is important because the impact of airborne particles on human health depends on particle diameter and composition. For example, particles larger than 10 micrometers are generally filtered out by the upper respiratory tract, while particles smaller than 10 are inhaled and may be transported to the lungs. From the lungs, trace metals from the particulate matter can be taken up by macrophages and transported to the blood stream, potentially increasing levels of toxic metals in the blood, which has been associated with neurotoxic effects such as reduced cognitive function.1 Contaminants such as lead and arsenic in dust and aerosol are also a particular concern for adverse health effects from mining activities.