A new study has shown that periphyton — a community of algae, bacteria, and other natural material living on submerged surfaces — is helping to transform mercury from a Superfund site into methylmercury, a more toxic form. The study, led by Dartmouth College Superfund Research Program (SRP) researchers, also found lower than anticipated levels of methylmercury in small fish located downstream from a former chemical plant, despite elevated levels of methylmercury in sediment, water, and periphyton.

Aquatic environments are conducive to the conversion of inorganic mercury, the form typically released into the environment, to methylmercury. Methylmercury can easily pass up the food chain and bioaccumulate in high concentrations in predatory fish. Methylmercury exposure can have negative cardiovascular, neurological, developmental, and behavioral effects in both wildlife and humans, mainly through consumption of contaminated fish. 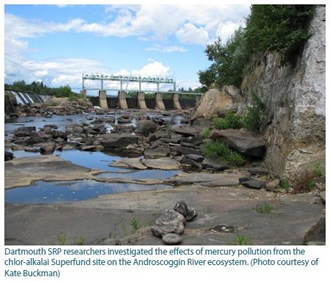 Researchers, including the project leader, Celia Chen, Ph.D., and Post-doctoral Associate and lead author, Kate Buckman, Ph.D., collaborated with scientists from the U.S. Geological Survey to examine the influence of the chlor-alkali Superfund site in Berlin, New Hampshire, which is on the Androscoggin River. Chlor-alkali facilities used mercury to produce chlorine and sodium hydroxide, commodity chemicals for industrial processes. The investigators found that surface sediment next to the site had methylmercury levels up to 40 times higher and total mercury levels up to 30 times higher than other areas of the river. Mercury concentrations in the water next to the site were up to five times higher than downstream.

In the study, the increase in methylmercury concentration downstream of the mercury source previously seen in large adult fish was not seen in crayfish, mayflies, and shiners, which are lower on the food chain.  This was contrary to expectations in part because periphyton, which had increased levels of methylmercury per area downstream, is an important food source for these lower trophic organisms.

The results shed light on the effects of the chlor-alkali Superfund site on mercury dynamics within rivers and their food webs. The researchers say that future studies should investigate the influence of individual site characteristics to explore what is driving the differences in mercury bioaccumulation seen between river reaches in their study as well as in other studies.

“While our study clearly demonstrated that the chlor-alkali Superfund site is impacting this section of the Androscoggin River, future studies could investigate whether other factors such as dams, river grade, wetlands, or upland drainage influence the patterns of bioaccumulation in other reaches of the river,” said Chen. "An even greater potential may exist for mercury bioaccumulation downstream of the Shelburne Dam, where the river broadens and slows even further."