PCE in Drinking Water Linked to Cancer and Epilepsy

Early-life exposure to tetrachloroethylene (PCE; perchloroethylene) in drinking water may increase the risk of epilepsy and certain types of cancer into adulthood, according to Boston University Superfund Research Program (BU SRP) Center researchers. PCE is a solvent frequently used in dry cleaning solutions, adhesives, metal degreasers, and other commercial products.

Ann Aschengrau, Sc.D., the project leader at BU SRP, investigated whether prenatal and early childhood exposure to PCE-contaminated drinking water had a long-term effect on health using a cohort of people born between 1969 and 1983 in eight towns in the Cape Cod region of Massachusetts. This study population was chosen because a vinyl liner containing PCE was applied to pipes in the area’s drinking water distribution system from 1968 to 1980 to improve the taste and odor of the water. Manufacturers assumed the PCE would disappear during the drying process, but the vinyl liner was insufficiently cured, allowing PCE to leach into the water supply. 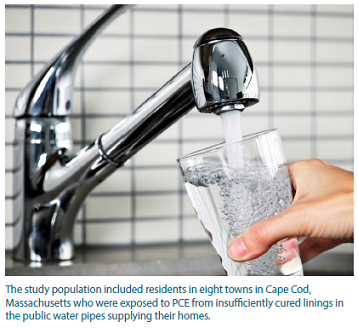 The pipes containing the vinyl liner were installed as new or replacement piping was required, which led to irregular patterns of affected pipes with a wide range of PCE concentrations in drinking water. As a result, exposed and unexposed people could live in the same neighborhoods. This specific and unusual exposure was discovered in 1980 and has since been brought down to levels considered acceptable by the U.S. Environmental Protection Agency.

Between 2006 and 2008, researchers sent a self-administered questionnaire to people who were born between 1969 and 1983 in one of the eight towns in the study region to gather information on demographic characteristics, chronic conditions, and other sources of solvent exposure. The researchers inspected pipe distribution network maps to identify the residences where the PCE-contaminated vinyl-lined pipes provided the only possible residential water source.

PCE exposure levels were then estimated for all participants who had complete residential histories in the area from birth through age five. The participants' residences, water sources, and pipe characteristics were used to estimate PCE exposure with water distribution modeling software from the U.S. Environmental Protection Agency. After establishing whether people were exposed or unexposed, they compared the groups according to incidence of later-life health outcomes.

Based on reports of cancer incidence from study participants, the researchers calculated that people with early-life exposure to PCE-contaminated drinking water were 1.8 times more likely to develop cancer than the unexposed participants. Participants reported a variety of cancers, but there was a particular increase in cancer of the cervix. Researchers also found an increase in the risk of epilepsy among people with any exposure, with greater increase in risk among those with exposure levels at or above the median of exposure.

The researchers found no association between early-life PCE exposure and increased risk of obesity, diabetes, cardiovascular disease, hypertension, or color blindness and other visual abnormalities.

According to the authors, this study confirms the need for follow-up studies of populations exposed to PCE through drinking water that include medical confirmation of disease. They also suggest that the study population should be monitored periodically to assess later-life health outcomes to better understand disease risk.

In addition to the health outcomes investigated in this study, Aschengrau’s team previously reported an association between PCE exposure and increased risk of mental illness1, affinity for risky behaviors2, visual impairments3, and decreased performance on neuropsychological tests4.

According to the authors, PCE contamination of public water remains a common issue. PCE can get into drinking water aquifers with improper disposal of PCE from dry cleaning facilities, landfills, and leaking underground storage tanks.