Bacteria and other microbes in the intestines prevent liver fibrosis, or scarring, upon chronic liver injury in mice, according to a new study from the University of California, San Diego (UCSD). The research, funded in part by the Superfund Research Program (SRP), is the first to show a beneficial role of intestinal microbiota in maintaining liver homeostasis and preventing liver fibrosis resulting from chronic damage to the liver.

Trillions of microbes live inside humans and are largely concentrated in the intestines. The "leaky gut hypothesis" is the idea that when bacteria pass from the gastrointestinal tract to other areas, such as the liver, they may contribute to the onset and progression of disease. Despite these known negative effects, all potential roles of the microbiota have not been thoroughly investigated. In this study, researchers provide evidence that a healthy community of microorganisms in the intestines may actually be protecting the liver, not hurting it.

Investigating the Effects of the Microbiota on Liver Injury

Researchers compared the onset of liver fibrosis in conventional mice, with typical intestinal microbiota, to germ-free mice, which are born and raised in special facilities to keep them from microorganisms. In both sets of mice, they induced liver injury with thioacetamide in drinking water or injections of carbon tetrachloride and measured the changes to their livers.

They found increased liver fibrosis in the germ-free mice, which lack intestinal microbiota, compared to the conventional mice. The hepatocytes, which make up more than 70 percent of the liver, showed more oxidative stress and cell death in the germ-free mice. Researchers also observed increased activation of hepatic stellate cells, which is a sign of liver fibrosis.

Next, to see if the immune system is involved in how the microbiota protects the liver, they compared conventional mice to mice bred to lack specific proteins (Myd88 and Trif) that play a key role in triggering an innate immune response in the body. Myd88 and Trif bind to receptors in the liver that activate proinflammatory responses, which can lead to regeneration of liver tissue and prevention of livery injury. Results of the study show that these Myd88/Trif-deficient mice had more severe fibrosis than conventional mice after chronic liver injury. They also found that Myd88/Trif-deficient hepatocytes were more susceptible to cell death when exposed to toxicants. This coincides with other studies that have found that proteins that play a role in immune system processes may also be involved in moving bacteria from the gut to the liver.

Protecting the Liver from Chronic Damage

Causes of liver injury include alcohol, drugs, hepatitis and other viruses, and chemical exposure. Ongoing and chronic injury leads to death of hepatocytes and exhausts the ability of hepatocytes to regenerate, resulting in liver fibrosis.

According to the authors, a low baseline level of bacteria in the liver may help protect hepatocytes from these toxic stimuli. But when higher levels of microbes enter the liver, they do not provide additional resistance but can instead increase liver damage.

This is the first study to show that microbes in the gut are not always bad for the liver and can even be protective. Next, scientists hope to begin identifying and characterizing the microbes that play this protective role, with the ultimate goal of improving patient outcomes in chronic liver disease by manipulating the intestinal microbiome. 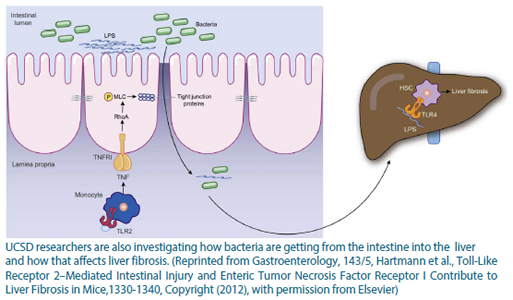