Research Brief 251: Development of a Sustainable Remediation System to Remove TCE from Groundwater

Development of a Sustainable Remediation System to Remove TCE from Groundwater

An electrochemical system can effectively remove trichloroethylene (TCE) from groundwater at high flow rates, as demonstrated by researchers at the Northeastern University Superfund Research Program (SRP) Center. They optimized the electrode material and configuration to determine the best conditions to dechlorinate TCE at a flow rate of one liter per minute, which exists in karst aquifers.

Karst aquifers are a particular type of groundwater system that supplies drinking water in Puerto Rico, as well as in several U.S. regions and around the world. The karst aquifers contain cave systems that are vulnerable to contamination from toxic chemicals, such as TCE. This is because these contaminants tend to be trapped in the rock formations as non-aqueous phase liquids (known as NAPLs) and there is little opportunity for their dissolved phase to be filtered by soil or to become bound to bedrock while flowing through the systems. 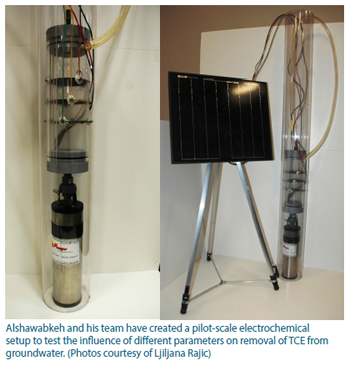 The research team, led by Akram Alshawabkeh, Ph.D., is developing novel solar-powered technologies for remediation of contaminated groundwater, particularly in karst systems. Because groundwater is electrochemically conductive and contains a low concentration of chlorinated compounds, applying low direct electric currents can manipulate the chemistry of the water to transform contaminants to non-toxic substances.

Designing a System to Remove TCE

The researchers simulated groundwater conditions in the lab to test the system performance by using various electrode materials. From the combinations they tested, they found that the optimized design for removal efficiency involved an iron anode, a mixed metal oxide cathode, and using a palladium catalyst to promote dechlorination of TCE. 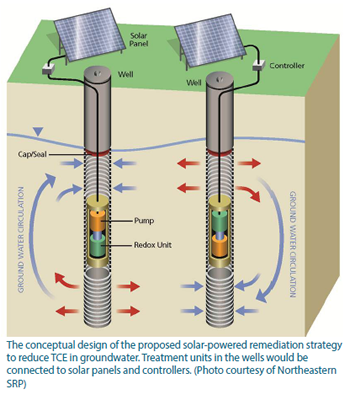 According to the authors, although this system is effective even at the lower current rates, further research is required to address changes in parameters that may occur in the field within aquifers, such as changes in groundwater flow rate as a result of seasonal rainfall.

The researchers continue to develop this system with the ultimate goal of creating a cost-effective and sustainable electrochemical process using a solar panel as a power supply. They have recently reported on their work to optimize the electrode arrangement and the modification of the electrodes to enhance TCE removal. For example, they have shown that having multiple cathodes upstream from an anode and in the presence of a palladium catalyst is an effective method to promote the reduction of TCE in groundwater.1 They also showed that an increase in the nickel content in the cathode materials, such as stainless steel, improves the TCE removal rate.2

Additionally, the team is evaluating potential competing processes that should be addressed before implementing the device in the field. For example, they demonstrated that the presence of humic substances adversely affects TCE removal but that the presence of limestone gravel reduces this negative impact.3