Arsenic exposure may alter immune response to a common pathogen in the lung, according to a recent study from the Dartmouth College Superfund Research Program (SRP) Center. This study provides insight into how arsenic exposure may increase the risk of respiratory infection and chronic obstructive pulmonary disease, which is associated with chronic bacterial infections and other non-malignant lung infections. The study also helps discern the contribution of organic forms of arsenic alone to the alteration of the innate immune response in the lung.

Arsenic is usually found in two forms: an organic compound (when it is combined with carbon and other elements) or an inorganic compound (when it is combined with elements other than carbon). Inorganic arsenic compounds are highly toxic because they can be rapidly absorbed and accumulate in the body. While little is currently known about the effects of organic arsenic exposure on human health, these forms are generally considered less toxic because they can be eliminated from the body more easily. 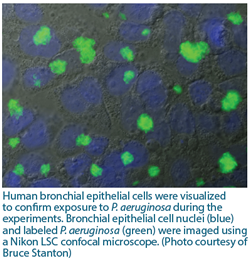 Responding to an Infection in the Lung

P. aeruginosa lung infections stimulate the production of several cytokines, or small signaling proteins such as interleukin 6, interleukin 8, and chemokine (C-X-C motif) ligand 1, in human bronchial epithelial cells. These cytokines recruit immune cells to the lungs to fight the infection as part of an innate immune response. In such a response, cells recognize and respond to pathogens in a generic way to provide an immediate defense against infection.

An appropriate cytokine response is important to heal infections with minimal damage to the lungs. If the immune response is too high, the activation of immune cells can lead to inflammation and lung damage. On the other hand, a low immune response reduces the ability to clear P. aeruginosa from the lungs, which can cause severe and irreversible damage.

To see how arsenic affects this immune response in the lung, the researchers examined how arsenic changes the cytokine excretion by bronchial epithelial cells induced by P. aeruginosa. The researchers focused on an inorganic form of arsenic, inorganic sodium arsenite, and two major organic metabolites of arsenic, monomethylarsonous acid (MMA) and dimethylarsinous acid (DMA), commonly found in the human body as a result of arsenic exposure.

The researchers exposed bronchial epithelial cells to a combination of inorganic sodium arsenite, MMA, and DMA totaling 10 parts per billion arsenic, which reflects blood levels relevant to drinking water exposures in the U.S. They found that the combination of inorganic and organic arsenic suppressed the secretion of specific cytokines responsible for immune cell recruitment. However, MMA alone induced secretion of cytokines, exacerbating the immune response to P. aeruginosa. Additional studies are needed to examine the distinct mechanisms whereby MMA induces cytokine secretion in bronchial epithelial cells.

The Effects of Low-Level Arsenic Exposures

The U.S. Geological Survey has reported that more than 25 million people in the U.S. are exposed to well water with arsenic concentrations exceeding 10 parts per billion, the current U.S. Environmental Protection Agency (EPA) limit for public water supplies. In this study, effects of arsenic at the EPA limit were seen in cell culture in response to infection.

The results from this study show dysregulation of cytokines associated with the immune response in human bronchial epithelial cells after exposure to MMA alone and to a combination of inorganic sodium arsenite, MMA, and DMA. The study also provides important and novel data demonstrating that organic forms of arsenic (alone and at low doses) have negative effects on the immune response of bronchial cells to infection in cell culture.