Research Brief 255: The Effect of Corrinoid Co-factors on Bioremediation of Chlorinated Compounds

The Effect of Corrinoid Co-factors on Bioremediation of Chlorinated Compounds

Specific modifications to helper molecules, or co-factors, play an important role in how efficiently some bacteria can degrade toxic chlorinated pollutants. In a new study, researchers from the University of Tennessee found that specific chemical modifications to corrinoid co-factors, a group of molecules that includes vitamin B12, can affect how well bacteria degrade chlorinated pollutants such as tetrachloroethene (PCE) and trichloroethene (TCE). These findings could help improve cleanup of chlorinated contaminants at hazardous waste sites.

TCE, a human carcinogen, and PCE, a probable human carcinogen, are both on the Agency for Toxic Substances and Disease Registry priority list of hazardous substances due to their toxicity and prevalence at hazardous waste sites. Dehalococcoides mccartyi (Dhc) bacteria are used for bioremediation of TCE and PCE because they can turn these hazardous compounds into non-toxic ethene through the process of reductive dechlorination.

A research team led by Frank Löffler, Ph.D., discovered that changes to the lower tail chemical structure of corrinoids influence Dhc bioremediation efficiency. They found that minor differences in the lower tail affected whether degradation stopped at vinyl chloride, a carcinogen, or proceeded all the way to non-toxic ethene (see figure), a finding that emphasizes the importance of understanding the biological and chemical conditions of a site for successful bioremediation.

Investigating the Chemical Structure of Corrinoids 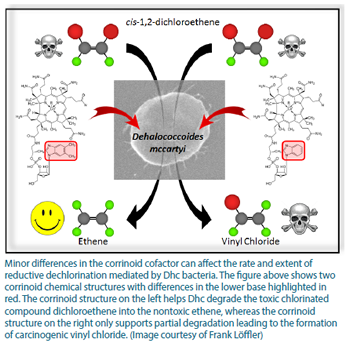 Most organisms, including Dhc bacteria, require corrinoids for normal functioning, with vitamin B12 being the best known member of this group of co-factors. Corrinoids are complicated biological molecules synthesized by some, but not all, microbes. Non-producers such as Dhc bacteria, must rely on the corrinoids produced by other bacteria, which differ depending on a site’s specific geochemical conditions.

Part of the chemical structure of corrinoids is a lower tail with a “lower base.” This lower base has received relatively little attention because it is not directly involved in performing reductive dechlorination reactions.

To study the function of the lower base, the researchers grew Dhc in the presence of polychlorinated ethenes and corrinoids with different lower base chemical structures. They determined dechlorination rates by measuring the amount of dechlorination daughter products, including ethene, formed over time.

These efforts determined that Dhc responded differently to corrinoids with different lower base structures, leading to differing levels of dechlorination. The chemical structure of the lower base affected reductive dechlorination rates and extents, potentially leading to the formation of carcinogenic vinyl chloride. Because the synthesis of corrinoids depends on other microbes, this work emphasizes that understanding the surrounding microbial community is essential to predicting Dhc activity.

Supplying carbon substrates (i.e., electron donors) is a common management practice at hazardous waste sites to stimulate reductive dechlorination. This is done under the assumption that electron donors are limiting Dhc activity and the bioremediation process. Although repeated electron donor additions can sustain reductive dechlorination activity at some sites, the process does not always result in ethene formation, and it has been difficult to determine the reasons why detoxification could not be achieved.

The new findings can help explain why the dechlorination process stalls at some contaminated sites. Depending on biological and chemical conditions and the types of carbon substrates used to stimulate biological activity, microorganisms that produce a corrinoid with the “wrong” lower base may dominate. In these scenarios, the common practice of continually adding more carbon substrates will not stimulate and sustain Dhc activity and lead to efficient contaminant detoxification. Understanding under what geochemical conditions the microbial community produces lower base structures that efficiently support Dhc dechlorination activity may promote faster detoxification at contaminated waste sites and thus minimize the risk of human exposure to hazardous chemicals.