Research Brief 259: Phytostabilization of Mine Tailings with Compost-Assisted Direct Planting

Amending mine waste with compost is a viable and promising alternative to the expensive process of covering an entire site with a thick soil or rock cap followed by seeding, according to research from the University of Arizona Superfund Research Program (UA SRP) Center. A recent field study at the Iron King Mine and Humboldt Smelter Superfund site showed that adding amendments and seeds led to establishment of native plants and sustained growth on mine tailings over 4 years. The trial was based on successful results from preliminary greenhouse studies, which scaled effectively to the field. 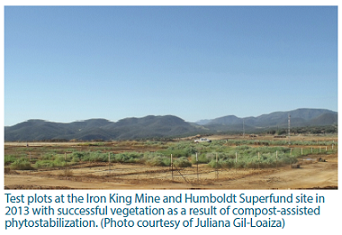 Mine tailings are the main waste product remaining after ore extraction. At older sites, mine tailings are often highly acidic and contaminated with various metals, which can disperse into the surrounding environment if they are not addressed. A team led by Raina Maier, Ph.D., at the UA SRP Center is investigating phytostabilization, or planting directly on mine tailings, to immobilize the metals so they cannot be spread by wind or through water erosion to nearby communities or ecosystems. In addition to acidity and metals, the arid southwestern U.S., the location of the UA SRP studies, brings the further challenge of low rainfall on establishing plants, even those that are drought-tolerant. Establishing vegetation on these sites using direct planting generally requires some kind of amendment, such as compost, to help plants grow.

Successful Results in the Field

The mine tailings at the Iron King Mine and Humboldt Superfund site, which have not supported plant growth for decades, are typical of legacy sites: very acidic and highly contaminated with metals. During the 41-month field trial, UA SRP researchers successfully established a vegetative cover over the tailings with just a single application of compost and supplemental irrigation. They added compost at varying levels to improve the ability of the tailings to support plant growth by providing a source of organic matter that changed the soil’s bacterial composition, mitigated the acidic conditions, and bound up toxic metals.

Beginning in May 2010, UA SRP researchers established a study area on top of the mine tailings to investigate the levels of compost and other conditions required for growth. They amended study plots with either 10, 15, or 20 percent compost. Half of the plots were seeded with a mix of native plants that were previously successful in greenhouse studies while the other half of the plots were not seeded. They also installed a sprinkler irrigation system to supplement rainfall and promote initial growth. After 41 months, they compared the vegetative cover in the composted and seeded plots to (1) the composted and unseeded plots, (2) control plots on the mine tailings that were uncomposted and unseeded, and (3) uncontaminated areas surrounding the Superfund site. 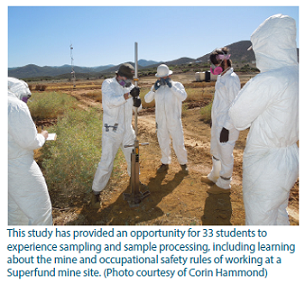 They found that the plots with 15 and 20 percent compost resulted in 21 to 61 percent vegetative cover at the end of the trial period compared to no plant growth on unamended tailings. The levels of vegetative cover in the composted plots were similar to levels found in surrounding regions not contaminated with mine tailings. Some of the native plants continued to propogate each year, leading to an unexpected result - the establishment of plants in plots that had received compost but were not seeded. UA SRP researchers observed this as a fertility island effect in which healthy plants produce seed that can spread to new areas. This effect potentially could lead to cost savings on seeds.

Upon investigating the bacterial community in the amended soil, the researchers found that adding compost led to increased numbers of neutrophilic heterotrophic bacteria, which promote plant growth, by 1 to 3 orders of magnitude. This increase in bacteria was maintained throughout the trial, suggesting a sustained shift in the soil microbial community that promotes plant growth.

The researchers also studied accumulation of arsenic, lead, zinc, cadmium, copper, and nickel in the plants grown on the compost-amended plots and found that shoot tissue accumulation was at or below Domestic Animal Toxicity Limits. This provides evidence that the bioaccumulation of metals in the plants used was limited, which helps to prevent the movement of contaminants into the surrounding ecosystem and food chain by grazing animals.

Translation of Greenhouse Results to a Contaminated Site

Importantly, the study showed that previous results from a greenhouse study translated effectively to the field, including the level of compost required for effective vegetation as well as the amount of metal accumulation in the shoot tissues.

Mine tailing characteristics such as pH, metal content, and minerals found in the soil can vary widely from site to site, so successful parameters for phytostabilization at one site may not be effective at another. This study shows that preliminary greenhouse trials using mine tailings from a specific site can precisely determine the minimum amount of compost and the types of plants that can be successfully grown. As a result, greenhouse trials serve as a useful first step that will likely enhance successful implementation in the field.