Environmental Exposures and AhR in Oral Cancer Development and Progression

The aryl hydrocarbon receptor (AhR) plays an important role in oral cancer, and environmental chemicals and bacteria that activate the AhR may worsen oral cancer development and progression, according to a recent study from the Boston University Superfund Research Program (SRP) Center.

Recent studies have shown that environmental carcinogens do not just induce DNA mutations that lead to cancer. Some environmental chemicals, including environmental dioxins, polychlorinated biphenyls (PCBs), and polycyclic aromatic hydrocarbons (PAHs), have been linked to activation of signaling pathways responsible for cancer progression into lethal, metastatic forms. One such pathway is through the AhR, a protein involved in the regulation of various biological responses and cell maintenance in the body. In this study, researchers led by David Sherr, Ph.D., found that the AhR is also involved in the progression of relatively benign cancers into highly metastatic malignancies. They also investigated how AhR ligands – compounds that bind to the AhR – increase its activity and exacerbate progression of oral squamous cell carcinoma (OSCC), the most common type of oral cancer. 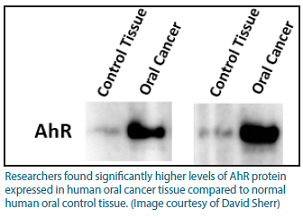 By conducting experiments in human tissues and cells, the Sherr laboratory demonstrated that chronically activated AhR, likely stimulated by natural ligands within the body, may play an ongoing role in OSCC. They observed that tissues from OSCC patients expressed elevated AhR levels compared to normal tissue. They also found that the AhR protein was functional and always active in OSCC cell lines even in the absence of environmental chemicals or added ligands.

That said, the researchers discovered that environmental chemicals, including the PAH benzo[a]pyrene, 2,3,7,8-tetrachlorodibenzo-p-dioxin (TCDD) and PAH-containing particulate matter, further increased AhR activity in OSCC cell lines. AhR activity also increased in the presence of some bacterial products, particularly a product made by Pseudomonas aeruginosa, a bacterium that can cause infections including pneumonia, and Porphyromonas gingivalis, which is implicated in certain forms of periodontal disease.

The ability of P. aeruginosa and P. gingivalis to activate the AhR suggests that bacteria, as well as environmental exposures, may play a role in OSCC. Because P. gingivalis is a common oral pathogen, this shows the importance of investigating all exposures for their contributions to disease, including combinations of chemical exposures and bacteria.

The researchers then looked at how AhR activity contributes to the production of cancer stem-like cells, which are invasive, highly efficient at tumor formation, and can be resistant to chemotherapy and radiotherapy treatments. They found that an enzyme associated with cancer stem-like cells was present at higher levels when the AhR was active and that AhR ligands, such as those from bacteria and environmental chemicals, increased this response. Blocking AhR activity with inhibitors reduced levels of the enzyme and reduced resistance to chemotherapy.

A key characteristic of invasive and malignant cancer cells is their ability to migrate. The researchers determined that AhR ligands increased migration rates, suggesting that these environmental or bacterial-derived compounds accelerate OSCC cell migration and metastasis, exacerbating disease progression.

The researchers injected mice with OSCC cell lines to explore further the role of the AhR in OSCC progression. They treated some of the mice with an AhR inhibitor and compared tumor volume, animal weight, and mouse survival. Tumor volumes in the mice given the inhibitor were significantly lower than in the untreated mice. The treated mice also lost less weight and were more likely to survive than the mice that were not given AhR inhibitors.

By blocking AhR with an inhibitor, the researchers were able to reduce AhR activity in OSCC cell lines and reduce the ability of OSCC cells to form tumors in mice. Based on these results, the researchers suggest that the AhR inhibitor used, CB7993113, shows therapeutic potential to inhibit tumor progression and metastasis in OSCC. AhR inhibitors were also effective at blocking AhR activity in the presence of environmental and bacterial-derived ligands. Treatments to block AhR also may have the potential to reduce cancer stem-like cells, which could decrease the resistance of OSCC cells to chemotherapy.