Research Brief 263: A Link Between Exposure to PCBs, Diet, and Cardiovascular Disease

A Link Between Exposure to PCBs, Diet, and Cardiovascular Disease

Researchers at the University of Kentucky Superfund Research Program (UK SRP) Center have identified a new mechanism linking exposure to polychlorinated biphenyls (PCBs) and cardiovascular disease (CVD). They revealed that PCBs can lead to increased production of a biological marker of CVD, which is also linked to consumption of red meat and other animal products, revealing a novel diet-toxicant interaction associated with CVD risk.

PCBs are a class of compounds used for decades in many industrial applications, such as electrical equipment. Although commercial production of PCBs was banned in most countries including the United States in 1979, they persist in the environment because of their stable chemical structure. PCBs, which can be found in air, water, soil, and sediments, are common at Superfund sites in Kentucky and nationwide. Exposure to PCBs, particularly dioxin-like PCBs, has been linked to increased risk of cancer, diabetes, and cardiovascular disease, among other potential health effects.

PCB Exposure and TMAO Levels in the Blood UK SRP Center researchers led by Bernhard Hennig, Ph.D., together with Michael Petriello, Ph.D., and Andrew Morris, Ph.D., showed that exposure to PCBs in mice led to increased levels of trimethylamine N-oxide (TMAO) in the blood. TMAO is produced when the body metabolizes foods containing certain compounds such as choline and L-carnitine, which are abundant in red meat and other animal products. TMAO is also considered a biomarker for CVD risk since several large studies in humans have shown that circulating levels of TMAO are a powerful risk factor for heart disease.

When dietary precursors to TMAO are consumed, they are metabolized by gut microbiota to trimethylamine (TMA). TMA is then metabolized further to form TMAO by flavin-containing monooxygenases (FMO), particularly the FMO3 isoform.

The researchers discovered that exposure to PCBs in mice increased the levels of FMO3 in the liver, increasing the circulating levels of TMAO in the blood. They observed a 100-fold increase in FMO3 mRNA expression, increased induction of the FMO3 protein, and a 5-fold increase in TMAO levels in PCB-exposed mice compared to unexposed mice.

Although studies have linked diet to levels of TMAO in the blood, this is the first study to identify dioxin-like PCBs as a modulator of this interaction. According to the UK SRP scientists, this research clearly shows that, in pre-clinical models, exposure to PCBs increases the circulating levels of a biomarker of CVD risk and raises the possibility that exposure to environmental pollutants like PCBs contributes to inter-individual variability in blood TMAO levels. They also suggest that TMAO levels may be used as a biomarker to monitor changes in FMO3 expression and activity in PCB-exposed individuals.

Because TMAO is formed by metabolism of dietary lipids that are particularly rich in meat and dairy products, the researchers also suggest that healthy diets that reduce consumption of these products might be particularly beneficial for people who are exposed to PCBs in order to reduce their risk of CVD.

The UK SRP Center research team is now working with researchers at the Centers for Disease Control and Prevention to see whether the relationship between exposure to environmental pollutants and circulating TMAO levels observed in the lab is evident in people. Using blood samples from PCB-exposed individuals from an Anniston, Alabama cohort, they are analyzing the links between circulating PCB levels in the blood to levels of TMAO and other nutritionally relevant biological markers of disease risk. 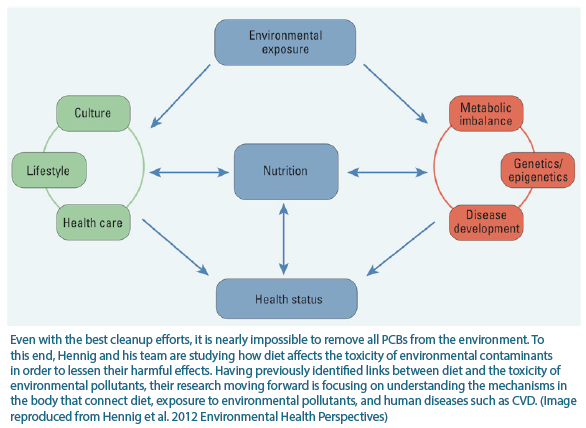