Research Brief 265: The Genetics Behind the Killifish's Adaptation to Pollution

The Genetics Behind the Killifish's Adaptation to Pollution

Killifish living in four polluted East Coast estuaries have adapted quickly to survive high levels of toxic industrial pollutants. In a new study, researchers explored the complex genetics involved in the Atlantic killifish’s resilience, bringing us one step closer to understanding how they rapidly evolved to tolerate normally lethal levels of environmental contaminants. Exploring the evolutionary basis for these genetic changes may provide new information about the mechanisms of environmental chemical toxicity in both animals and humans. 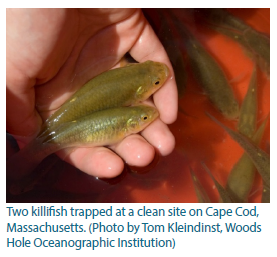 The new study, published in the journal Science, used powerful genomic approaches to sequence and then scan the entire killifish genome from multiple fish populations, allowing an unbiased search for genes involved in chemical tolerance. The findings provide information about which genes are linked with tolerance to specific chemicals and how genetic differences may affect an organism’s sensitivity to environmental contaminants.

The study, led by Andrew Whitehead, Ph.D., at the University of California, Davis, built on decades of research into the killifish’s ability to survive industrial contamination. Superfund Research Program (SRP)-funded scientists at Woods Hole Oceanographic Institution (WHOI) collaborated on the study, which was also funded by the National Science Foundation, the NIEHS Oceans and Human Health program, and the U.S. Environmental Protection Agency (EPA).

A Genetic Basis for Resilience

The Atlantic killifish is non-migratory and abundant in U.S. East Coast salt marsh estuaries, including sites contaminated with complex mixtures of persistent industrial pollutants, such as polychlorinated biphenyls (PCBs), dioxins, and polycyclic aromatic hydrocarbons. Killifish living in highly polluted areas can tolerate concentrations up to 8,000 times higher than similar killifish living at sites that are not polluted. To better understand the genetic basis for this adaptation, researchers analyzed 384 whole killifish genome sequences and compared genomes from killifish in non-polluted sites to genomes of killifish from polluted sites in New Bedford Harbor, Massachusetts; Newark Bay, New Jersey; Connecticut’s Bridgeport area; and Virginia’s Elizabeth River.

By pairing killifish from polluted and non-polluted sites, the researchers revealed hundreds of genome regions where the pollutant-resistant killifish appeared to undergo natural selection. Several of the regions had changes in all four resistant populations and included genes involved in the previously identified aryl hydrocarbon receptor (AHR) signaling pathway, which is responsible for regulating a number of biological responses. However, rather than finding a single change in an AHR gene, the researchers found changes in a variety of genes involved in the AHR pathway.

According to the study authors, the convergence on the AHR pathway in the four distinct populations suggests that there are likely a limited number of evolutionary ways for adaptation to pollution to occur. However, within those constraints, there is more than one molecular solution, as reflected in the differences in some selected genes in the different populations. The new findings also suggest that the killifish’s genetic diversity makes them unusually well-positioned to quickly adapt and survive in radically altered habitats.

Like fish, humans have an AHR, which controls the body’s response to some drugs and pollutants. Previous studies in mice, birds, and some fish show that variation in AHR itself can control sensitivity to dioxin-like chemicals. Although there is some inter-individual genetic variation in AHRs among humans, the differences in AHR do not fully account for differences in chemical susceptibility or resilience. This study demonstrates, in a natural population, that genetic variation in other genes encoding proteins in the AHR pathway may also contribute to variations in sensitivity among individuals and populations. This informs future research to better explain how genetic differences among humans and other species may contribute to differences in sensitivity to environmental chemicals.

WHOI biologists and study authors Mark Hahn, Ph.D., and Sibel Karchner, Ph.D., have been studying killifish resistant to contamination in New Bedford Harbor since 1995 as part of the Boston University (BU) SRP Center, in collaboration with researchers from the EPA’s Atlantic Ecology Division in Rhode Island. The new study built on earlier work from the BU SRP Center focused on characterizing the PCB-resistant New Bedford Harbor fish and identifying and characterizing genes in the AHR signaling pathway that may be responsible for tolerance to environmental contaminants. 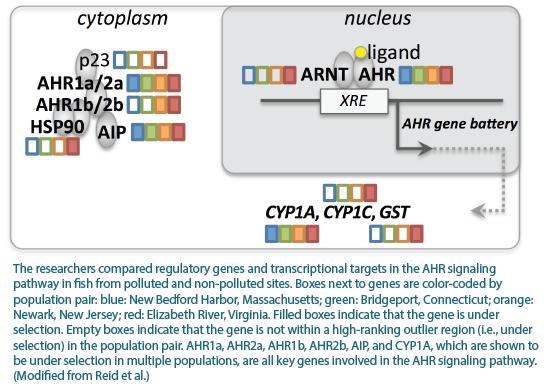