Using Surfactants to Enhance Bioremediation of PAHs in Soil

A second-stage treatment using low levels of surfactants, which are commonly used as dispersing agents, may be a promising method to maximize removal of polycyclic aromatic hydrocarbons (PAHs) at hazardous waste sites, according to findings from the University of North Carolina at Chapel Hill Superfund Research Program (UNC SRP) Center. Researchers identified specific surfactants that enhanced the removal of PAHs from previously treated soil by making the chemicals more accessible for degradation by bacteria. Even though this second-stage treatment removed PAHs, it also increased soil toxicity in many cases, emphasizing the need to better understand toxic by-products of PAH remediation. 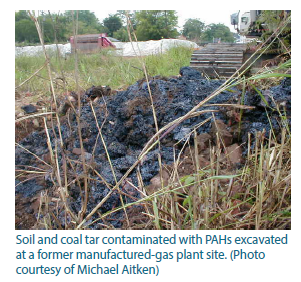 PAHs, a group of more than 100 different chemicals found in materials such as coal tar or creosote, are consequences of industrial processes and among the top ten contaminants of concern at Superfund sites in the United States. These chemically related compounds can have varied molecular weights, structures, and toxic effects. Several forms of PAHs, particularly higher molecular weight compounds, are considered known or suspected carcinogens. Even though bioremediation, which uses organisms such as bacteria to degrade, or break down, contaminants, is a common treatment for PAH-contaminated soil, it does not always remove enough PAHs to meet cleanup goals. This is because contaminants, especially high molecular weight PAHs, often attach to soil particles, making the contaminants unavailable for bacteria to break down.

The study, led by Michael Aitken, Ph.D., built on previous UNC SRP Center research, which revealed that certain types of surfactants enhanced PAH removal when the chemicals were not easily accessible to the bacteria.1 In the new work, the researchers focused on soil from a former manufactured-gas plant that had undergone bioremediation but still contained the less bioavailable PAHs attached to soil particles.

Adding Surfactants as a Secondary Step 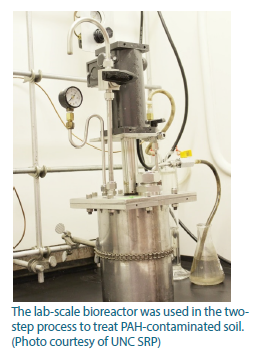 The researchers identified three surfactants that were particularly effective at enhancing biodegradation of high molecular weight PAHs, including five of the seven PAHs considered probable human carcinogens. Test tube experiments showed that low levels of these surfactants removed up to 80 percent of remaining PAHs from soil that had already undergone an initial biological treatment.

The researchers expanded this finding in a second study by evaluating the two-stage process in a bioreactor, an apparatus wherein larger scale bioremediation can be carried out. In the first stage, soil was treated in the bioreactor without surfactants, which removed the most accessible PAHs. In the second stage, the soil was treated with surfactants, and this resulted in a substantial removal of PAHs, including more than 80 percent of certain high molecular weight PAHs.

In both studies, researchers used a DNA damage test to measure the soil’s genotoxicity, or potential to damage genetic information within a cell, which can lead to cancer. Despite reduced PAHs, most treatments led to an increase in genotoxicity, indicating that the enhanced degradation process using the surfactants may have led to products that were more toxic than the original PAH compound. Because PAH removal did not necessarily correspond to reduced toxicity, the authors suggest that further research is needed to identify the toxic by-products in order to improve risk management and remediation strategies.

In a small-scale companion study, the researchers also showed that the surfactants substantially affected the bacterial community.2 They identified eight groups of abundant bacteria that may be involved in the increased removal of high molecular weight PAHs. Future research on these bacteria groups could help scientists better understand the bioremediation process. They also found that using lower concentrations of surfactants may have fewer negative effects on indigenous PAH-degrading bacteria while enhancing PAH availability and increasing overall PAH removal.