Exposure to a mixture of polycyclic aromatic hydrocarbons (PAHs) may produce different neurodevelopmental effects from those of exposure to individual PAHs, and the developing brain may be sensitive to these contaminants over a wide window of development, according to a Duke University Superfund Research Program (SRP) Center study.

Researchers identified direct effects of an environmentally relevant PAH mixture and a single PAH, benzo[a]pyrene (BaP), at two different points in neurodevelopment, reinforcing the need to consider mixtures rather than single compounds in exposure studies. The study also provided mechanistic evidence for associations between developmental PAH exposures and behavioral deficits that have been previously observed in children and animals.

The first cell-based model, which uses pheochromocytoma (PC12) cells, has been used in thousands of studies to evaluate neurodevelopmental neurotoxicants. PC12 cells can be made to develop into neurons, the basic working unit of the brain. Neurons are the cells that transmit the information to enable learning, memory, emotion, and all of the other functions we associate with a working brain. Because PC12 cells undergo the essential processes that make a cell into a neuron, this model can be used to assess how exposure to chemicals affects neuron development. The researchers found that BaP impaired the transition into neurons, resulting in a higher number of smaller cells with deficits in neuronal features, including impaired neuronal projections and reduced differentiation into specific neurotransmitter types. On the other hand, the environmental PAH mixture did far less damage and only caused modest changes in cell numbers and size and no impairment of neuronal features. 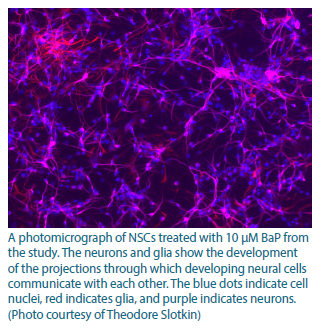 The second cell-based model, which used embryonic neural stem cells (NSCs), considers an earlier point in neurodevelopment at which NSCs choose to become neurons or glia. Glia support and protect neurons and provide guidance for the migration of neurons to their proper location in the developing brain. In contrast to the PC12 cell model, the NSCs were much more sensitive to exposure to the environmental PAH mixture than to BaP. The environmental mixture enhanced the formation of neurons, resulting in a profound drop in the glia-to-neuron ratio, which can affect brain homeostasis and function.

Widening the windows of susceptibility

According to the authors, the study findings show that a complex PAH mixture can produce effects that differ in direction and magnitude from those of a single PAH like BaP. These differences may be a result of interactions among mixture components and may indicate potential health effects over a wider window of development, ranging from the earliest decision points when neurons and glia are formed through their later stages of development into specialized structures. Because sensitivity to different PAHs may occur during various developmental stages, the authors suggest that vulnerability to PAH exposure likely extends throughout fetal brain development and into early childhood.