A newly developed panel of zebrafish genes can be combined with a rapid testing platform to identify chemicals that induce oxidative stress, according to researchers at the University of Washington (UW) Superfund Research Program (SRP) Center. The method, optimized for use on larval zebrafish by UW SRP Center researchers, is cost-effective and can be performed more quickly and with less tissue than conventional methods.

The potential for oxidative stress is indicated by changes in expression for a set of genes that encode antioxidant proteins to combat oxidative stress. In both zebrafish and humans, these antioxidant genes are regulated by the protein Nrf2 (NFE2 p45-related Factor 2).

According to the researchers, oxidative stress contributes to a wide range of human diseases, including neurodegeneration, cardiac conditions such as atherosclerosis, and cell death associated with ischemia and reperfusion injuries. 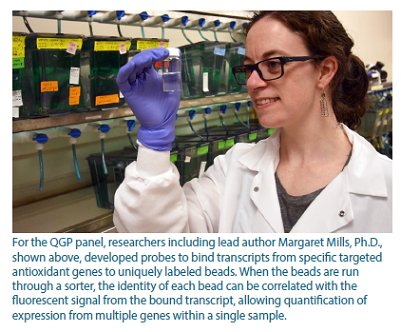 UW SRP Center researchers led by Evan Gallagher, Ph.D., investigated the Affymetrix QuantiGene Plex (QGP) platform, which provides a fast and high-throughput way to measure the expression of target genes. QGP is a flexible method that allows for quantification of up to 80 genes within a single sample. The researchers developed a targeted panel of 13 genes that contained Nrf2-dependent antioxidant genes, genes responsive to oxidative stress or DNA damage but not dependent on Nrf2, and three reference genes.

To test the QGP platform, the researchers used it to examine their panel of genes in larval zebrafish exposed to tert-butyl hydroperoxide (tBHP) and cadmium (Cd). These chemicals were used because they both can induce oxidative stress and activate Nrf2 but do so through different molecular mechanisms.

The researchers compared the QGP results to those obtained with quantitative polymerase chain reaction (qPCR), the conventional laboratory method used to assess changes in gene expression. They found that both QGP and qPCR revealed the same changes in gene expression in zebrafish exposed to tBHP and Cd and had comparable reagent costs. However, QGP required significantly less time and tissue to carry out the same analysis.

The authors noted that QGP was relatively simple to perform compared to qPCR, in part, because qPCR requires RNA purification and an additional processing step, while QGP can be performed using unpurified homogenized tissue. This means that QGP is not only faster to perform but also eliminates potential sources of variation and contamination that can occur during the additional qPCR-related steps. The QGP analysis also required far less tissue. While qPCR requires tissue from a minimum of four zebrafish larvae to be pooled for each sample used to analyze the 13 genes, QGP requires only a single larva. QGP thus not only requires fewer animals but also allows analysis of individual variation in gene expression since only one organism is needed per sample. The inclusion of three reference genes, as opposed to one normalization gene often used in qPCR studies, further reduced the potential for variation associated with measuring gene expression.

The researchers provided quantitative evidence that exposure of larval zebrafish to Cd generated changes in the expression of several Nrf2-dependent antioxidant genes. However, they found that two genes in their panel known to be affected by Cd or tBHP exposure in mammals seemed to be unaffected in the exposed zebrafish. This evidence of similarities and differences in how some Nrf2 genes are regulated in zebrafish and mammals may be important for understanding which markers in larval zebrafish are associated with antioxidant function in mammals.

In another study, Gallagher and his research team showed that two forms of Nrf2, as well as associated antioxidant genes, are also present in salmon and may be used to examine how these factors may regulate antioxidant gene expression and mitigate oxidative stress in the fish. This informs further studies of salmon Nrf2 gene markers to better understand their response to potentially harmful chemicals in aquatic habitats.

As part of the UW SRP Center, researchers led by Gallagher use both zebrafish and salmon to investigate how exposure to metals such as cadmium may impact regional survival of fish. Their work to examine the Nrf2 pathway as a marker of oxidative stress in zebrafish and salmon may have implications for both human and ecological health.