Prenatal exposure to both alcohol and tetrachloroethylene, also known as perchloroethylene or PCE, may increase the risk of using multiple illicit drugs as a teenager, according to a study by Boston University Superfund Research Program (BU SRP) Center researchers. PCE is a solvent frequently used in dry cleaning solutions, adhesives, metal degreasers, and other commercial products.

Lisa Gallagher, D.Sc., Thomas Webster D.Sc., and Ann Aschengrau, Sc.D., examined the effects of early-life PCE exposure from contaminated drinking water on risk-taking behaviors of residents in Cape Cod, Massachusetts born between 1969 and 1983. Beginning in 1968, a vinyl liner containing PCE was applied to pipes in the drinking water distribution system. The vinyl liner was improperly cured, leaching PCE into the water supply. Due to the irregular pattern of the affected pipes, the region had drinking water with different levels of PCE concentrations when contamination was discovered in 1980. This prompted BU SRP Center researchers to study the potential health effects of PCE exposure during this specific window of contamination. 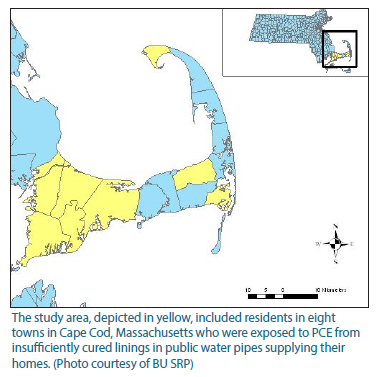 BU SRP Center researchers previously found that residents who were exposed to PCE-contaminated water early in life had higher occurrences of risk-taking behaviors, particularly illicit drug use, than those not exposed. To see whether alcoholic beverage consumption during pregnancy modified this observed association, they compared residents without prenatal exposure to PCE-contaminated water or alcohol, those with only PCE exposure or only alcohol exposure, and those with exposure to both.

The researchers used information on participants’ residences, water sources, and pipe characteristics to determine whether they had been exposed to PCE from their drinking water. They gathered self-reported information on illicit drug use from more than 660 children born to mothers exposed to PCE. Mothers completed surveys with questions about prenatal alcoholic beverage consumption as well as other behaviors during pregnancy.

Preliminary Evidence for an Additive Effect

The study showed that residents with prenatal exposure to both PCE and alcohol were 90 percent more likely to use two or more illicit drugs as a teenager compared to unexposed subjects. The researchers also observed increased risks from PCE-only and alcohol-only exposure, but they were smaller than the increased risk associated with both exposures combined.

According to the authors, this provided evidence for an additive effect of prenatal exposure to PCE and alcohol on the risk of multiple illicit drugs used as a teenager. They also suggested that because PCE and alcohol are both solvents, they may act by similar mechanisms on the behaviors under study.

The authors cautioned that further research is needed to examine the long-term behavioral effects of the early-life exposures. They added that because the risk-taking behaviors occurred many years after the exposures, additional studies are needed to determine the roles that social factors, such as the level of parental supervision and peer influences, might play in the increased rates of drug use.